How much is Ripple? Expand

Why is Ethereum dropping? Expand 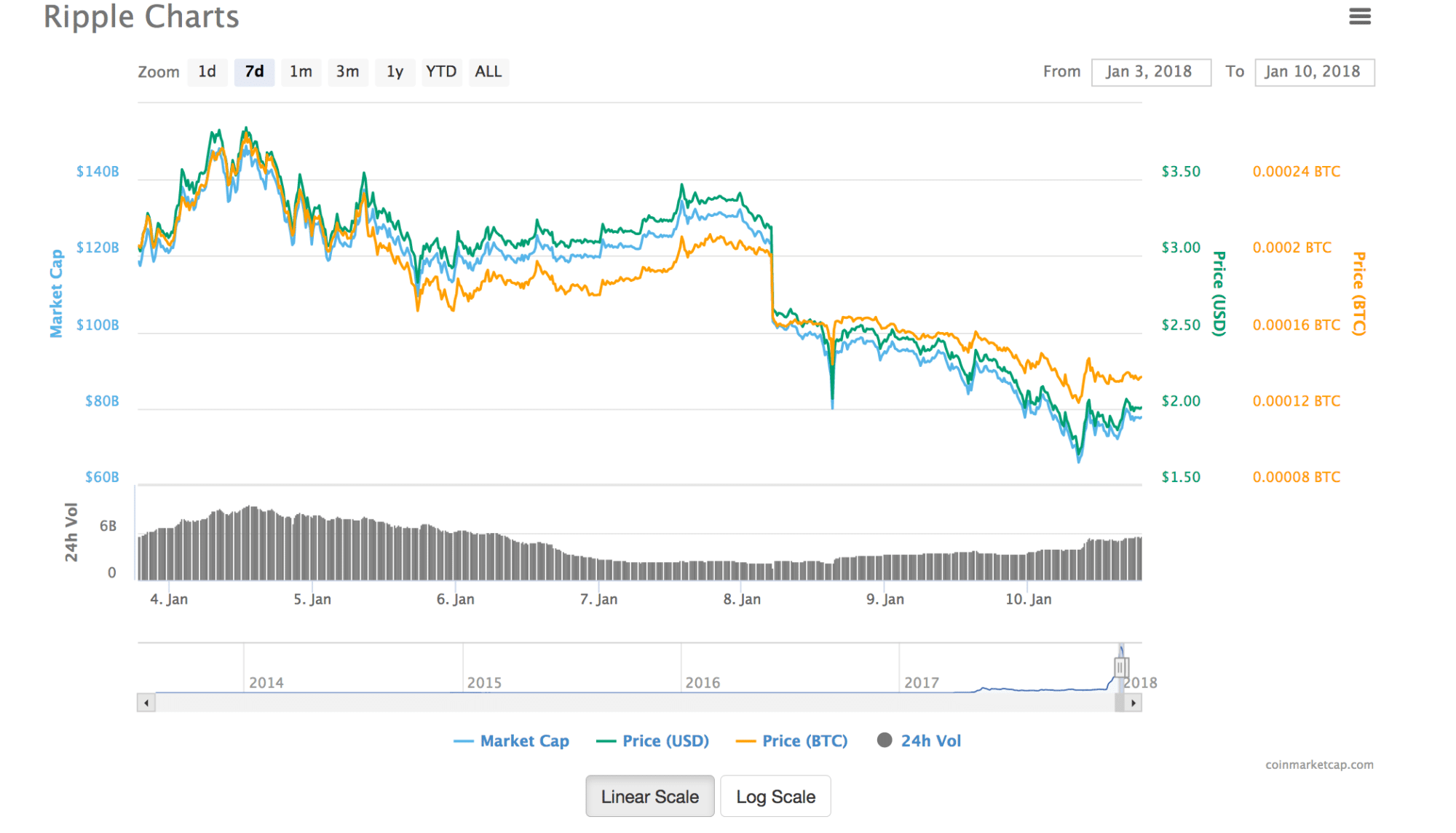 Over the past month, cryptocurrency enthusiasts who had allotted some of their capital towards XRP during earlier times were ecstatic. On December 16th, the price of XRP traded around 23 cents, reaching ATH’s of $3.81 on CoinMarketCap, or roughly a 1556% increase.

So when the price dropped from around $3.20 to $2.60 in less than an hour on January 8th, stunned investors experienced FUD (fear, uncertainty, and doubt) and sold coins in an attempt to mitigate further losses. The drop knocked Ripple down a position from the 2nd to the 3rd spot after experiencing a loss of $20 billion in total market share.

Shortly after the drop, CoinMarketCap stated on Twitter that “this morning we excluded some Korean exchanges in price calculations due to the extreme divergence in prices from the rest of the world and limited arbitrage opportunity. We are working on better tools to provide users with the averages that are most relevant to them.”

In many cases, Korean-based exchanges such as Bithumb and Korbit reported nearly 30% higher price valuations for XRP compared to exchanges such as Bitstamp. Given that Korean exchanges have been notably higher than alternate markets and that the price aims to portray the global average, the explanation and reasoning for price adjustment are plausible.

However, many followers of the account alleged the company of such activities such as market manipulation and bribery to get the price to lower levels. This would allow stakeholders knowing of the plan to sell the price high and buy more at lower prices.

Responding to panicked investors, Ripple’s chief cryptographer announced “Coinmarketcap’s decision to exclude Korean prices from the displayed XRP price made the price appear to drop, likely triggering some panic selling. Look closely at the data and don’t be mislead.”

The price fluctuation among exchanges has always been a subject of concern and potential opportunity for the crypto-community. When planning on selling, many investors will deposit their currencies on an exchange that reveals higher prices, ultimately receiving a larger chunk of fiat cash when withdrawing.

Keeping the aspect of price fluctuation among exchanges in mind with the astonishing price deviations by alternate geographical markets, is it time for sites like CoinMarketCap to offer users the opportunity to show prices based on location?  It seems likely that this could potentially alleviate further possible confusion for many international investors when dealing with cryptocurrency purchases.