Status is a mobile operating system that will completely change the way the world interacts with the Ethereum network.  Designed as a decentralized browser and private messenger, Status allows you to connect to the entire Ethereum network right in the palm of your hand.

Operating as a light client node on Ethereum, Status provides you access to all of Ethereum’s decentralized applications (DApps) through an app on your smartphone. It opens the door to mass adoption of Ethereum DApps by targeting the fastest growing computer segment in the world – smartphone users.

Smartphone users will quickly realize that utilizing Ethereum and its DApps has never been so easy and convenient. How Status is Reinventing Social Networks

The Status network breaks the unbalanced architecture of legacy social media platforms. These traditional networks give almost all control to owners and advertisers; users are left with little power over what personal information they share. Additionally, legacy users have little voice to influence the evolution of the platform.

Social networks today consist of three basic parties: the owner, the advertiser, and the user.

The owner is normally the creator of the network. The owner’s main two roles are to recruit and retain users to the social media platform. After bringing users into the network, they focus on extracting value from users.

The advertiser, referred to as the data broker by Status, enables the owner to extract value from the network and its users. The advertiser plays a key role in ultimately sustaining the social media network by purchasing user data or purchasing ads for products and services.

Users are those who use social networks to connect with friends or to share their own special interests. In this model, users are almost powerless to control how the network is developed or the information they consume.

Forget about legacy social network models that only empower the owners and advertiser. With the issuance of Status Network Tokens (SNT), Status enables its users to become stakeholders in the network they participate in.

The platform’s design allows the behavior of its social network and software to be aligned with the interests of its users. As a Status user, you’re in complete control of what information you share, and you can vote on the future development of its decentralized network.

The Status Network is open source and free; everyone is encouraged to help build the future of the platform and the decentralized apps that run in its ecosystem.

The Status Network Token is a modular utility token that fuels the network. By default, Status is free to use and communicate with, but you need SNT to access certain features of the Status Mobile Ethereum Client.

Users that hold SNTs will also be able to steer the direction of development and influence how the network evolves.

To eliminate spam accounts, Status has made a policy that only accounts holding SNTs will be able to reserve a username. Similar to how Twitter recognizes verified accounts with badges, Status will give its users the ability to receive a badge that indicates the account is trustable.

To receive a badge, Status stakeholders will have to deposit SNT against usernames at a premium. Badges will indicate the amount of value or number of backers associated with the account.

The Status application is currently available for both Android and iOS. To download on an Android device, simply search and download Status from the Google Play store.

Downloading it on your iPhone takes a few extra steps; the application hasn’t made it to the Apple App Store just yet. To download, just head over to Status’s website and follow the directions its homepage.

As an open-source platform that connects to all of Ethereum’s DApps, Status’s potential features are truly limitless.

Here’s a quick overview of Status’s implemented features listed from its whitepaper.

Status’s Decentralized Push Notification Market comes with both pros and cons to the end user.

Unlike competitors who offer “free” push notifications on their social network, Status doesn’t profit from ads or by selling customers’ information to retailers.

Status believes in giving you a choice in all matters, hence the reason why you’ll be charged microtransactions for notification and storage.

Any SNT holder can make a decision proposal on the network.

Similar to how users can upvote or downvote content on Reddit, Status users have the ability to opt-in to curate the content that’s displayed on their application. This process of approving or disapproving content on Status is known as “signaling”.

Unlike Reddit where all users are given one equal vote to curate content, Status determines member vote strength by an algorithm that is mostly influenced by the number tokens held by an account.

Stakeholders are able to set a minimum amount of SNT that a Status user must deposit as a tribute for someone outside of their network to contact them.

To message a stakeholder, a user must first deposit the required amount of SNT declared by the “Tribute to Talk” recipient.  If the recipient replies to message, the recipient will also receive the deposited tributed amount posted by the original messenger.

Here is a list of some of Ethereum’s most popular DApps that Status supports.

To help grow the platform, Status proposes several features to be added in its whitepaper. Here is a quick overview of the biggest three.

A decentralized app inside Status, the Teller Network would allow stakeholders to find nearby users to exchange their cash for digital assets. The Teller Network will allow anyone with a smartphone to easily obtain cryptocurrency simply by paying cash.

Since the creation of Ethereum, the number of decentralized apps available on its network has recently skyrocketed. To combat this problem, Status plans to launch a Decentralized Application Directory that will be curated by its members.

Similar to the Apple App Store or the Google Play Store, Status plans to incorporate both categories and ratings to the Decentralized Application Directory to ensure you can find exactly what you’re looking for.

Status also plans to implement a Sticker Market that would allow anyone to design and sell their creations throughout the world.  Similar to its Decentralized Application Directory, the Sticker Market would be sorted by category as well as be curated up or down by user ranking.

Status plans to require all Sticker Market participants to hold SNT to ensure the quality of all users and sticker ratings. Other highlights of Status’s Hardwallet include being mobile ready and completely open source; the Hardwallet’s code can be inspected and edited to suit exactly any user’s needs.  The Status Hardwallet works with ETH, SNT, and ERC-20 tokens. In November 2017, the team also announced its launch of Status Open Bounty. This program provides open source collaboration solutions for both developers and organizations to finish projects.

Allowing organizations to decentralize their development, Status Open Bounty gives developers a list of projects that they have the option to contribute towards. It pays rewards in SNT or the ERC-20 cryptocurrency of your choice without third-party fees. Status’s Contribution Period began June 20th, 2017. Intended to run for weeks, the Contribution Period sold out in less than a day. SNTs were distributed at a rate of 10,000 SNT per 1 ETH.  In just a few hours, the project had raised a total of 99 million dollars.

When SNT first began listed on exchanges in July 2017, it began trading for roughly for $0.05. For the next five months, SNT performed poorly as its average price stuttered in the $0.03 to $0.04 range. Starting an impressive bull run in early December 2017, SNT quickly skyrocketed all the way to an all-time high at 65 cents.

Where to Store SNT Tokens?

Generally, it is safest for investors to store their cryptocurrency holdings off an exchange.

As an ERC20 Token, SNTs must be stored in an Ethereum wallet. Popular software wallet choices that support ERC20 tokens include MyEtherWallet and MetaMask.

Providing the highest level of security, hardware wallets such as the Ledger Nano S or Trezor can also be used to store your tokens.

The Status Team is made up of over forty full-time members and ten experienced advisors. The bulk of the employees are engineers focused on the core development of the platform as well as the creation of decentralized applications. The rest of the team handles business operations such as community management, legal compliance, and marketing.

The Status Network was founded by Carl Bennets and Jarrad Hope, who have worked together for six years on various projects. For three years before Status, Carl and Jarrad successfully operated a software distribution network.

Their pre-Status accomplishments include achieving twenty million installations for different software products. With the profits made off of their software distribution network, Carl and Jarrad personally funded the project until its ICO. With experience building products built for over a billion users, Nabil brings immense experience and leadership to the Status Team. As COO, Nabil will be focused on creating a company vision, establishing a goal roadmap, and delivering the product as it moves into Beta. 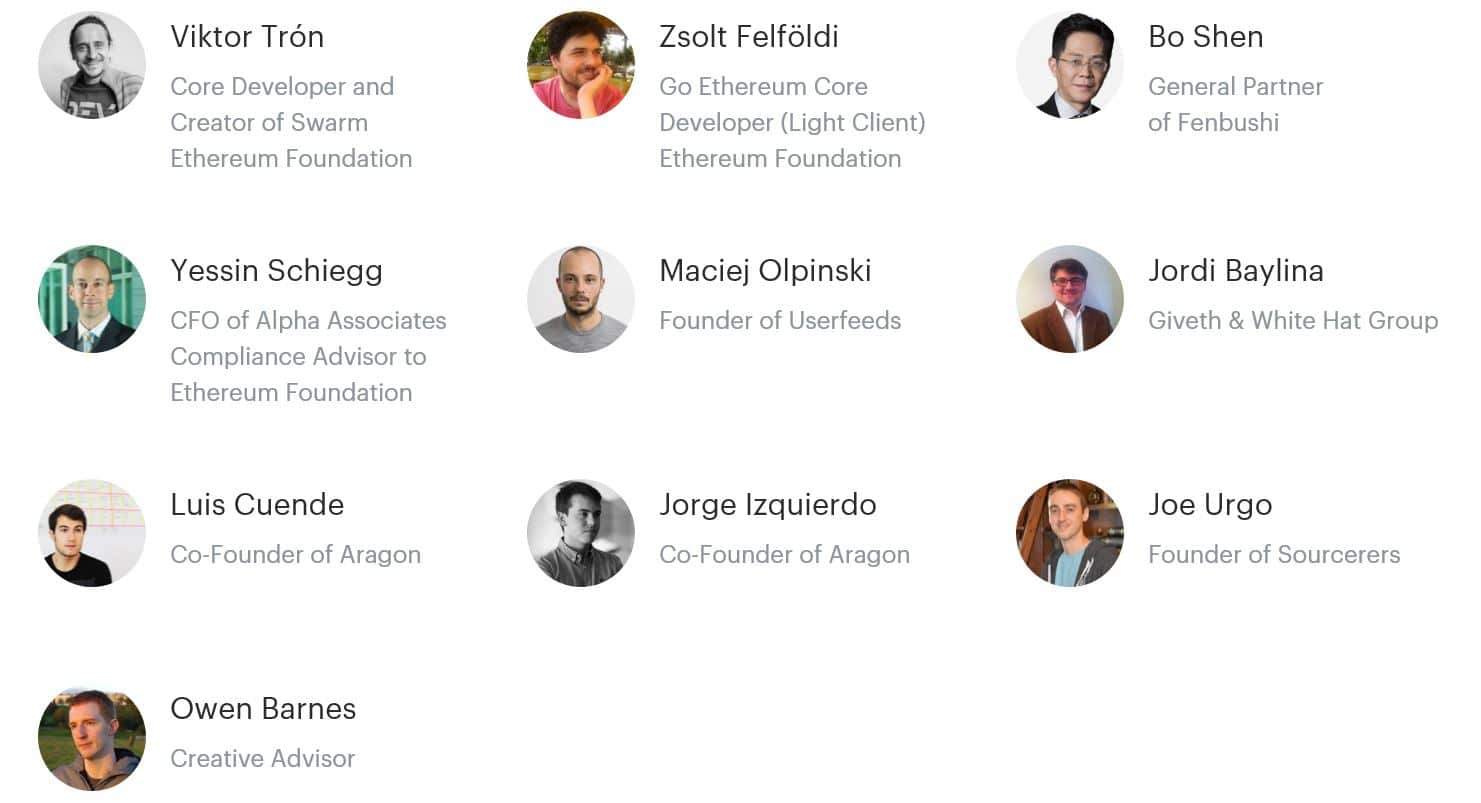 Status is a mobile client that puts the power of the entire Ethereum network right in your hand. The possibilities for this project are limitless as Status users have access to all current and future decentralized applications that run on Ethereum.

An open source and community focused project, Status encourages anyone to contribute to its operating system as well as the future of the decentralized web. Reimagining the social network, Status has uniquely given its users the power to decide how its platform will be governed and further developed.