What is Technical Analysis?

Technical analysis is a powerful evaluation tool that can be utilized by any investor before making any investment decision. Whether you’re trading Bitcoin, Ethereum, or any other coin, you should consider adding it to your investment strategy. Employed by investors to interpret momentum signals produced by the market, technical analysis assists traders in forecasting the price movements of an asset.

Although technical analysis can’t replace fundamental analysis, all investors can greatly benefit from the use of it to improve the timing of their investments. Fundamental analysis is typically more helpful in predicting the slower moving long-term trends of a coin. On the other hand, technical analysis tends to be more useful in determining the short-term rapid price movements of a coin.

Based on the principle that short-term price movements are not truly random, technical analysis asserts that all publicly available information about an asset should already be reflected in that asset’s market price.

In other words, technical analysis claims that past trading data of an asset is a better indicator of a coin’s future short-term price movements than the actual intrinsic value of the coin itself.

A trend is an observable directional bias in the price movement. During a trend, the price of an asset moves in a specific direction that’s expected to continue. Trends are typically classified into three directions: upward, downward, or sideways.

Upward trends are sometimes referred to as bullish. Likewise, downward trends are bearish. These adjectives are derived from the way each animal tends to fight; a bear typically swipes down with claws, meanwhile, a bull usually thrusts up with its horns. Technical analysis was pioneered by Charles Dow, who often wrote about the subject in his editorials of the Wall Street Journal throughout the 19th century. Dow’s writings collectively began to be known as Dow Theory.

Although Dow Theory has been refined by several writers over the past century, Dow’s writings still provide the basis of modern technical analysis. The main principles of Dow Theory are listed below:

Technical analysis can be divided into two main categories of chart patterns and indicators.

Chart patterns are distinct formations created by a security’s price movements over time on a chart. Distinct chart patterns are thought to be repeated due to market and investor psychology.

Definitions of trading patterns can be quite subjective as different traders may have differing opinions on what specifically constitutes a recognizable pattern. It’s also important to note that some chart patterns are more accurate than others.

As no chart pattern is perfectly accurate, an investor should use them in combination other with other technical indicators to reduce the statistical error of predictions.

Chart Patterns can be divided into two main categories of continuation patterns and reversal patterns. Indicators are mathematical calculations normally based off an asset’s price or volume used by investors to predict future price movement of the asset.

The most common type of indicator is called an oscillator. Oscillators are bounded within a set number range, most commonly 0 to 100. In addition to oscillators, some indicators are nonbounded.

Leading indicators are most helpful during periods of sideways trends or periods of no trend at all. They help traders determine moments when an asset’s price will mostly breakout or breakdown in a new trend.

Two of the most commonly used leading indicators are the Relative Strength Index (RSI) and Stochastics Oscillator.

Ranging from 0 to 100, RSI is a momentum indicator that compares the sizes of recent gains and losses over specified time to measure the price change of a security. 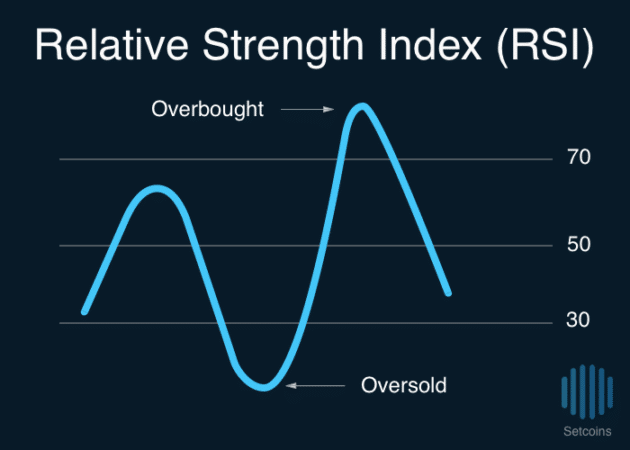 The stochastic 0scillator is a two-line momentum indicator comparing the closing price of an asset to a range of prices over a specified length of time.  The stochastics oscillator normally uses the last 14 days of trading data to calculate its score.

The stochastic oscillator is made up of two lines, the %K and the %D. %K measures the momentum of the asset while %D measures the three-day simple moving average of %K. Buy and sell signals are created when the %K line crossovers over %D line. Two of the most commonly used lagging indicators are Moving Averages and Bollinger Bands.

Several different moving averages are utilized in the technical analysis:

Plotted two standard deviations away from the simple moving average of a security, Bollinger Bands provide investors several cues about the price volatility of a security.

Although not a replacement for fundamental analysis, technical analysis is an important evaluation tool that can assist an investor in the timing of any investment decision. Will Other Distributed Ledgers Replace Blockchain?