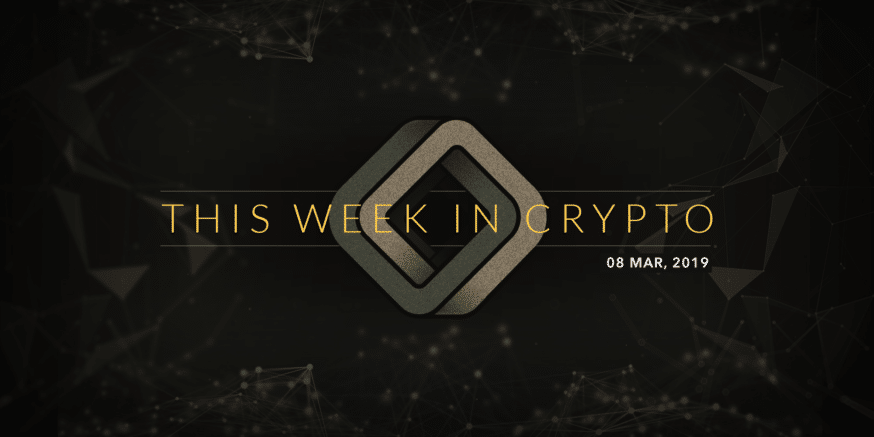 A little bit higher now. And a little bit higher now. The crypto market continued to show consistent growth this week, gaining over $2.5B in the overall market cap. Led by Litecoin (18.63%), Binance Coin (27.50%), and BAT (18.03%), the market grew a healthy two percent over the week. As for the top three coins: Bitcoin advocates were, of course, quick to swoop in. Anthony “Virus is spreading”Pompliano put in a request on Twitter for any followers to put him in contact with the Kroger executive team. And, Satoshi be damned, it actually worked. Pompliano followed up this week, informing the Twitter masses that he spoke with the Kroger digital team, and things look to be progressing. Bitcoin Lightning Network payments could be coming to a grocery store near you.

Grocery store @kroger is stopping acceptance of @Visa in over 250 stores because of network fees.

Who knows someone on the leadership team there?

The Morgan Creek Digital team will fly to meet them and get them hooked up with the Lightning Network nationwide. 🔥🙏🏽

Denver to Try Out Blockchain-Based Voting: The mile-high municipal is planning to pilot a mobile voting app for its election in May. They’re making the blockchain-based app available to active-duty military and their eligible dependents as well as any overseas voters. Moving the absentee voting process to a mobile app improves on the tedious process of having to print out and scan all the required documentation. And overall, it should help to increase voter turnout.

The progressive voting effort is in partnership with Tusk Philanthropies, an organization on a mission to “advance mobile voting and anti-hunger programs around the country.”

Dorsey, More Like Hoardsey: Bitcoin fanboy and Twitter/Square CEO Jack Dorsey is ensuring he’s on the right side of history when Bitcoin becomes mainstream. This week, on the Tales from the Crypt podcast, Dorsey revealed that recently he’s been gobbling up $10,000 worth of crypto each week, the maximum amount via Cash App.

IoTeX Founder Raullen Chai on the Internet of Things (IoT) and Privacy: We spoke with the team making sure your smart fridge won’t extort you for bitcoin someday.

The Argentinean Crypto Market Defies Crypto Winter: You could either place cause on the hemispheres or the questionable banking sector, but the Argentinean crypto winter is hot.

Social Media Giants Facebook and Telegram to Launch Own Digital Currencies: Because you should obviously trust your financial livelihood to the company that’s soo ethical with personal data.

Over 150k Bitcoins Accumulated by Bitcoin Whales in 60 Days: Nom, nom, nom. Looks like the whales are finally starting to eat their lunch.

What Is the Pastel Network (PSL)? | A Guide to the Digital Art Blockchain: We break down how this blockchain platform is making digital art provably rare and absolutely tradeable.

And, Behind Quadriga Door Number Three…: Nothing, apparently. Bloomberg reports that five of the six cold wallet addresses that Canadian exchange QuadrigaCX claims to have held the majority of users’ funds have been empty since April last year. To recap, Quadriga’s CEO, Gerald Cotton, died abruptly this year, allegedly taking the passwords to the majority of the exchange’s cold wallets with him.

Now, Ernst and Young is auditing the exchange in an attempt to find the hundreds of millions of dollars of user funds. So far, they haven’t had any luck. Their next line of attack is through Amazon Web Services (AWS). They’re looking for the court grant to order Amazon to give over details of the platform’s data. Because the account is in Cotton’s name, Amazon is unable (or unwilling) to hand it over without a court’s direction.

If Mining Crypto Is Cool, Consider Me Myles Davis: The verdict’s out. Colleges campuses are officially the second coolest place to mine cryptocurrency, according to a recent Cisco study. The birthplace of beer pong and keg stands came in second only to energy/utility plants. Twenty-two percent of all cryptocurrency mining activities occur on university grounds, likely due to the free electricity provided by the school. Other than students, though, Cisco threat researcher Austin McBribe believes that hackers have also been infecting campus computers with mining malware, AKA cryptojacking. He notes, “If you don’t have to pay for those costs, then you are in a really good spot for making money on the university’s dime.”