What Is Civic (CVC)? | A Guide to Blockchain Identity Verification What Is Civic (CVC)?

Imagine how many times you’ve had to go through a Know Your Customer (KYC) verification process. Whenever you apply for a new job, open a bank account, or participate in an ICO, you have to submit proof of identity and wait for it to be verified. Depending on the service, this could take days or weeks, as organizations have to spend the time and resources authenticating this information with outdated systems.

Civic offers a new-age solution to this problem, one where a single input of your personal identity information allows any organization or service to cross-check it on the blockchain without asking you to provide the same data twice–personal identity verification that is transferable from one service to another.

In this Civic guide, we cover what you need to know, including:

How Does Civic Work?

Civic’s network accommodates three different–but interdependent–entities: users, validators, and service providers. The users are anyone who wishes to use the protocol to register an identity. Civic makes this easy and safe with its Secure Identity app.

Validators are responsible for verifying an identity’s authenticity on the blockchain’s distributed ledger. They can then sell this information to service providers who need to verify their customer’s identities, exchanging the data for CVC. Civic is built on the Ethereum blockchain and uses smart contracts to oversee data attestation and payout for this work.

To get started with Civic, you need to download the Secure Identity app, either in its mobile or web form (or both). Setting up the application, you enter a variety of personal identity information, including your name, address, social security or tax identification number, passport number, driver’s license, etc. Without utilizing usernames and password, multi-factor biometrics, such as fingerprint scan, secure the application to keep it fully in your control.

The application also encrypts personal information with a private key issued by a third party wallet. This encryption provides a buffer between Civic and its users, giving you the peace of mind that Civic won’t access personal identity info without your consent.

In fact, Civic doesn’t store any personal information on the blockchain directly. Instead, it stores attestations of this information for reference. Storing references to the data instead of the data itself ensures that you are always in control of your own sensitive identity information while also providing proof that the validators have confirmed the authenticity of your data. 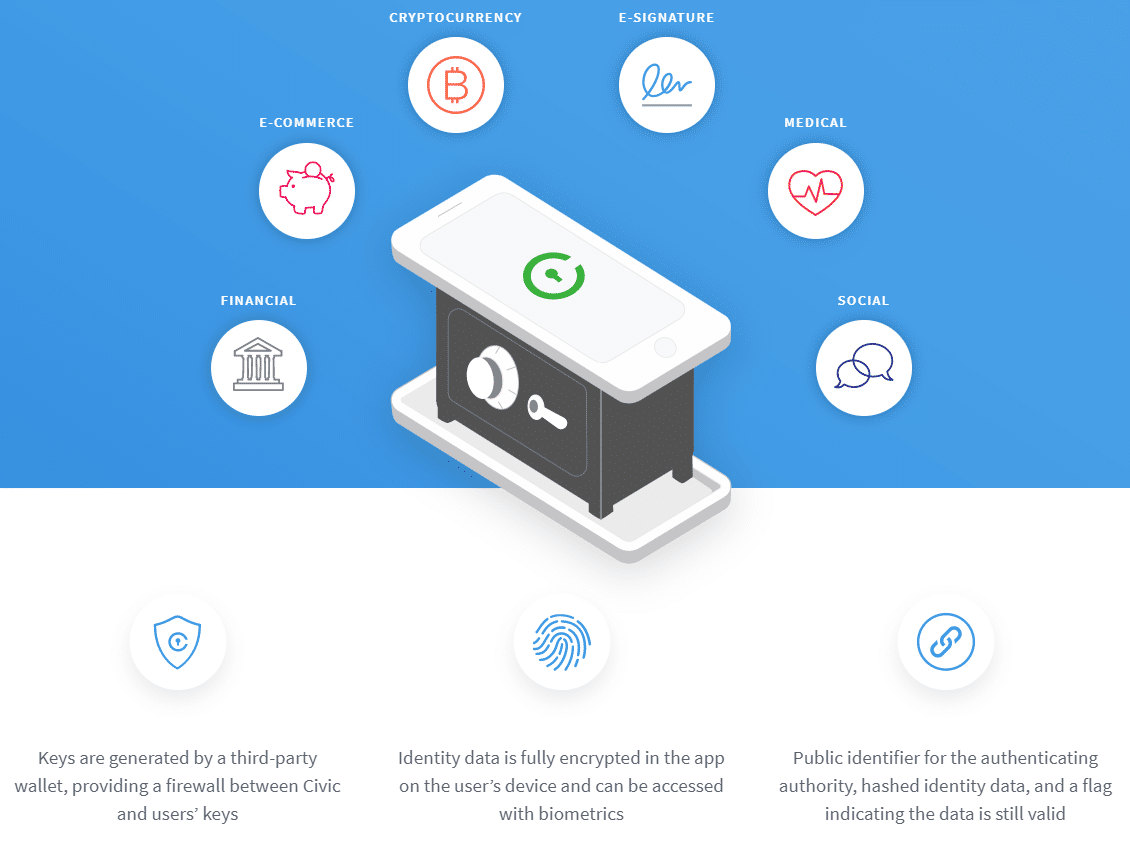 As we went over earlier, validators and service providers make up the other half of the network. Whereas the Civic app accommodates users on the front-end, validators and providers are responsible for back-end services. These services include identity attestation and KYC confirmation. Validators are responsible for verifying identities for the network, both on the blockchain and for service providers. If you want to submit personal identifying information to a service provider (e.g., an exchange, a bank, etc.), you submit the relevant info from your Civic app to a validation contract. These smart contracts act as escrow services for the transaction and provide validators with the identity data. After attesting that the information is authentic, the validators hash it onto the network.

Something to note: a validator could be the service provider itself, and for a user identity’s first commit to the network, it likely would be. Moreover, in order to confirm a user’s identity, validators need to crosscheck their information with some other source (e.g., public records, financial records). A government, for example, would provide a wealth of information as an identity authenticator.

Say a service provider, like a credit score company, needs access to a client’s credit history and bank account information. After communicating with the user, the service provider would submit a data request to a prior validator, maybe a credit card company, bank, or other financial institution. This validator would retrieve the hash for the requested information from the blockchain to attest it with the information that the client currently provides. If everything checks out, the validator is paid for these services (as is the user) and the service provider approves the client’s identity.

Co-founder and CEO Vinny Lingham is a serial entrepreneur with over ten years of e-commerce experience. A member of the Bitcoin Foundation, he’s also one of the sharks on Shark Tank South Africa.

Jonathan Smith, the project’s CTO and co-founder, has more than 15 years of experience with developing, technical analytics, and management for entities like Deloitte and RBS.

Civic already has a working product in its web and mobile app. And if you wanted to today, you could submit information to the network for attestation–so long as there’s a validator to verify it. In the 3rd quarter of 2018, the team rebranded the Civic Marketplace to Identity as well as implemented smart contracts and added support for fiat rates.

It seems that the team’s focus has shifted from the core Civic offering to the Identity marketplace. The roadmap for the final quarter of 2018 included open-sourcing Identity and providing a Validator Toolkit. However, it appears that neither of those tasks has been accomplished yet.

In 2019, the team plans to create Requester and Credential Wallet Toolkits. And, their ultimate goal is to have Identity fully launched sometime in the second quarter.

Because Civic is an identity management solution, it’s two largest blockchain competitors are SelfKey (KEY) and THEKEY (TKY). As you probably figured out, Civic’s biggest differentiator from the other two is the absence of the word key from its name. Jokes aside, even though all three projects focus on identity management, they go about it in different ways.

Civic and SelfKey utilize the Ethereum blockchain while THEKEY sits atop NEO. It should come as no surprise, then, that THEKEY is more focused on the Asian market than the other two. Civic also emphasizes the use of biometrics which the other two competitors don’t share.

The CVC token trading history has been disappointing, even considering the current bear market. After reaching $0.65 (~0.000183 BTC), its all-time high BTC value, one short month after launching, its done nothing but fallen. Although CVC’s USD value rose during the 2017 bull market, its BTC value didn’t come anywhere near its former high, demonstrating a poorer performance than the rest of the market.

Even the project’s highly publicized (and most likely expensive) purchase of Identity.com in July 2018 couldn’t help the price. The CVC price is currently trading around $0.05 (~0.0000141 BTC).

CVC derives its value from activity on the Identity marketplace. Until this product goes live, it’s difficult to see the price gaining any traction. However, news of a partnership with a notable corporation or government entity could give this project the kickstart it needs.

Where to Buy CVC

Binance dominates the CVC market, accounting for almost 50 percent of the token’s 24-hour volume in either BTC or ETH. Bittrex and Huobi are two other popular options.

Where to Store CVC

As an ERC20 token, you can store CVC in an Ethereum wallet. Your choices include MyEtherWallet, Ledger Nano S, Trezor, and MetaMask, to name a few.

With Civic, reusable KYC and personal identity information could streamline identity verification for any relevant service. Service providers don’t have to expend the effort and money to verify a user’s identity. As long as a validator on the network has done the legwork for them, they only need to pay a fee in Civic to have the information process in real time. Users also don’t have to recommit the same information to different organizations in tireless succession–saving additional time and effort.

Behind all of this is the promise of greater identity security and integrity. The Civic app’s encryption and biometric locking mechanisms give users complete control over their identities, while the blockchain’s own encryption and distributed nature keep this information free from theft and exposure without user consent.

Editor’s Note: This article was updated by Steven Buchko on 1.16.19 to reflect the recent changes of the project.