Coinbase and Blockchain both offer easy to use and set up cryptocurrency wallets and exchange digital currencies, but which is actually better?

Both allow you to get setup in just minutes and start using cryptocurrency including via mobile apps, but the caveats are in how those funds are deposited and transacted. This guide will help you make a decision about which wallet is best for your own cryptocurrency storage use.

See the chart to compare differences in Coinbase and Blockchain.info.

Both Coinbase and Blockchain offer great wallets. The key differences between Blockchain and Coinbase for the end user are the buying/selling methods offered as a service by the provider.

Coinbase is best suited for easy setup and buying/selling Bitcoin.

Blockchain, however, offers more resources and tools for using Bitcoin in the marketplace and only facilitates transactions carried out in cryptocurrency. Both platforms offer an easy to use website, app, and wallet. The dashboards are similar and offer information about your account as well as currency prices and trends. Once logged in, however, you will notice the differences between platforms. It takes only a few minutes to register for either service. This process entails verifying your account using email and phone numbers. Additionally, with Coinbase, you must add/verify financial accounts to start buying BTC, LTC or ETH with USD.

Coinbase makes it simple for you to buy and sell BTC, LTC or ETH using your bank account to purchase and PayPal or bank account to sell. This is likely the easiest and fastest way, with very minimal fees, to start converting dollars (USD) or another type of currency, into cryptocurrency. The user interface for Coinbase is very similar to Blockchain, laid out in panels on the website and navigation screens on the app, and both allow you to monitor the state of the cryptocurrencies on the exchange. Coinbase displays information about your portfolio on the dashboard. 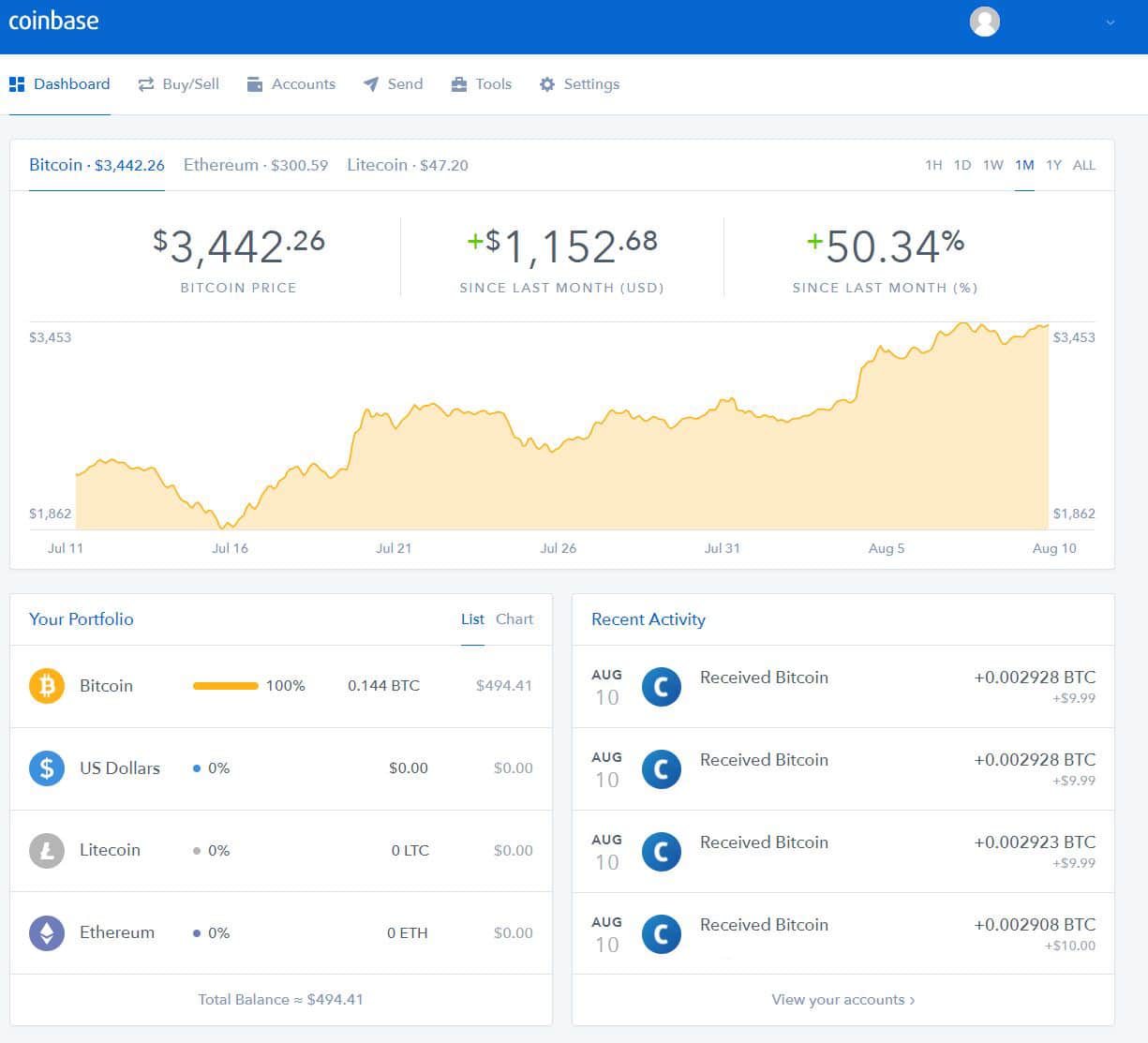 With Blockchain, you are only able to deal in cryptocurrency in all transactions. Notice in the screenshot that you can “send” or “request” right below where it says, “BE YOUR OWN BANK”, which kind of sums up the ideological difference in both services as well. Blockchain doesn’t deal with banks at all. You can send cryptocurrency to others and you can create a link to receive it, but there is no way to link your bank or other payment services provider accounts to buy/sell with USD the way you can on Coinbase.

In a way, Blockchain’s send and receive system is similar in interface and workflow terms (not actual processing) to PayPal’s system of sending money to others via email or receiving money with the PayPal.me link. Instead of sending a balance of actual cash, the link references the blockchain ledger technology so you can send or receive Bitcoin and Ethereum.

One interesting feature to the dashboard on Blockchain is the security center, where you can work out various ways to keep your account as safe as possible.

Blockchain aims to provide people and businesses with information, tools, research and resources that Coinbase has not really made a priority. This is why Blockchain has slowly become a  hub for enthusiasts in the digital coin space.

Customer support seems to be a sore spot for both Blockchain and Coinbase, though many people online complain little about the actual platform interfaces. In fact, most complaints about both Coinbase and Blockchain were the result of poor customer service responsiveness, which is usually the case for the majority of exchanges. Some users reported that they had not heard back from support teams for months and were only contacted by chatbots that relayed automated messages.

Some Coinbase users have even registered complaints with the Better Business Bureau (BBB) but Coinbase still managed to earn an A+ rating without being an accredited BBB company. However, our experience has generally been that the companies respond via email within a few days, but customer support responsiveness could definitely use improvement in the industry as a whole and these two platforms could certainly lead the way since they are so high profile in the cryptocurrency community.

Both Companies Are Trusted by the Community

The names Blockchain and Coinbase are frequently referenced in countless forums and other resources about Bitcoin and other digital currencies. Both are popular platforms in the cryptocurrency community and are certainly more accessible to newcomers. Also, both are in compliance with laws as U.S. based corporations and put security in high priority.

Safety and security is always a top concern when dealing with digital financial transactions. High profile hacks and fraud in the traditional financial system have put consumers on high alert. Cryptocurrency startups like Coinbase and Blockchain are keenly aware of this and continue to invest millions to secure their networks and minimize vulnerabilities.

Coinbase took the step of insuring transactions through Lloyd’s of London, in addition to the maximum $250,000 FDIC insurance on your wallet. However, both Blockchain and Coinbase users have reportedly been hacked in the past, some as a result of phishing schemes or other attacks, which have left users with emptied wallets after investing in cryptocurrency. The issue with these two services is not widespread, however, and users have sometimes received money back from the companies, whose executives themselves in the past have been targets of hacks.

The companies have been targets of sophisticated attacks, but their respective internal security systems helped prompt rapid response. This was true in the case in which Blockchain’s registrar was targeted in an attempt to gain access to user information. Blockchain shut the service down for hours to find the vulnerability and repair it.

Coinbase user accounts have been taken over by phishing scams involving mobile carriers, which is a problem industry-wide. On the whole, however, Coinbase’s security systems rival or outperform many of the largest banks and financial institutions with their machine learning security that can detect suspicious activity on accounts.

Coinbase and Blockchain both charge fees on a per transaction basis and are quite minimal, but Coinbase remains among the highest. For Coinbase users, the fees are a trade-off for key storage, security and other key features and convenience of the platform.

The above chart shows how typical Coinbase transaction fees work, with a base rate of 4% on all transactions. Blockchain charges fees in a similar way when sending and receiving funds, however, the fees vary a bit. Blockchain recently introduced dynamic fees, so users pay higher fees when network traffic is higher.

In using both services, it’s clear that each has its own benefits, depending on your own intent for use. You can use either to acquire BTC or ETH and use a mobile app for convenience. However, it is likely easier for newbies to get set up on the intuitive Coinbase platform. If you’re only planning to use cryptocurrency transactions without the need for a bank, Blockchain is your perfect wallet.