Lin Dai is a self-described nerd. He started his professional career in the first dot com boom while he was a student at Carnegie Mellon. Dai built one of the first social networks for teenagers called Kiwibox Media Inc. with about two million people on the website. After taking the company public, Dai moved to New York City and lived through the dot com crash and burn.

Dai went on to help major media companies such as Viacom and Alloy branch out into the digital advertising industry. After a few years in corporate, Dai itched to get back into the startup world and joined a mobile video social network startup called Keek, which he helped grow to 75 million users in about three years.

Today, Dai’s primary focus is running TAP Network, a blockchain-based network that powers an ecosystem that cuts out the third-party data merchant.

No matter how you cut it in the current digital advertising ecosystem, Facebook and Google will win 99% of the business.

Every other media brand is struggling. Media companies need ad revenue, which is under assault from Facebook.

Part of the solution for media companies is diversification of revenue streams. A future mix of revenue could be ⅓ subscription-based products, ⅓ media advertising, and ⅓ commerce.

What does the digital advertising landscape look like today?

The bulk of user data is aggregated by two companies: Google and Facebook. These companies leverage that data by providing it to third parties. These third-party marketers then use that data to advertise.

Advertising targeting runs over two sets of identities: a device ID (anything that happens on your phone they can target) and a browser ID (cookie or something that tracks you, and it doesn’t matter where you search). Your browser ID is tagged with something that advertisers can deliver advertising to. Hundreds of companies can collect your data through GPS location, different preferences you set, actions you take through browsers.

Advertising is very different today than its early days. Before it was like,  “we’re a shaving company and wanted to advertise on Men’s Health magazine!”

Now, advertisers are just buying programmatically. They don’t necessarily even see where their ads are, nor do they need to. They can target you, who they believe to be a potential customer, wherever you’re at. That’s fine in our eyes, as long as you’re giving them permission and are being compensated. But that’s just not how it works today. Multi-billion dollar companies are middlemen that allow marketers to take advantage of this data, and it’s not in the benefit of the individual nor the marketer.

While this model works, we don’t really see it as being sustainable. Most of this data is collected without a user’s permission, or at least the use of it by third parties isn’t explicitly approved by users.

The consumer is being targeted without their consent, and the intermediary is taking their commission regardless of a sale or not.

We’re imagining a way the consumer can delegate permission to a brand, and brands can understand their “opted-in” audiences better.

We started thinking about how we could create more value for users while also giving them ownership of their data. Part of that solution meant finding ways to collect data that is superior to what Facebook and Google are collecting. Also, we had to find a way to help make consumers aware of when their data is being arbitraged to monetized.

The problem is getting people to willingly share that type of data. How is the data collected by TAP superior to what Facebook and Google are collecting?

TAP members directly opt-in their purchase data, which is far more accurate than other behavioral data such as “likes” or interests on Facebook.

For example, if a consumer is willing to share how often and how much they spend at Domino’s every month, that’s far more accurate than if they simply “like” a photo of a pizza on Facebook.

Also, the major differentiator is TAP obtains first-party permission from the consumer directly on collecting the purchase data, as well as directly compensates the consumer in the form of rewards points or rewards dollars from brands. This is fundamentally different from major social network and internet platforms collecting and monetizing your data without direct compensation to you.

How does a company extract monetary value out of the data collected?

Accurate purchase data allows our network of brands and merchants to cater to specific deals and rewards to the individual consumer and generate higher ROI.

For example, a customer’s purchases greatly impact the value of their data. For example. if my purchase data and history indicates I’m a heavy traveler that travels 14 times a year and spends $20,000 or more annually on hotels and airfare, major hotel groups in the TAP Network will offer up to 70% off publically available rates specifically to me next time I’m booking travel via the TAP booking engine.

TAP Network receives a commission on the sales generated and splits the majority of the proceeds in the form of rewards to the consumer.

Could you describe the marketplace for finding buyers for this data?

TAP doesn’t sell user data, ever. User data is secured and anonymized in the TAP system, and TAP works directly with brands and merchants who are looking to make offers to TAP rewards members that fit certain criteria or purchase patterns.

Perhaps a major pizza chain would like to offer a bonus reward to anyone that purchases $100 or more per month on pizza, or a streaming service would like to offer everyone who hasn’t used their service yet a trial offer. The data will be leveraged anonymously for building each campaign but never sold outside of the TAP ecosystem.

What incentivizes the merchant partner to partner with TAP? 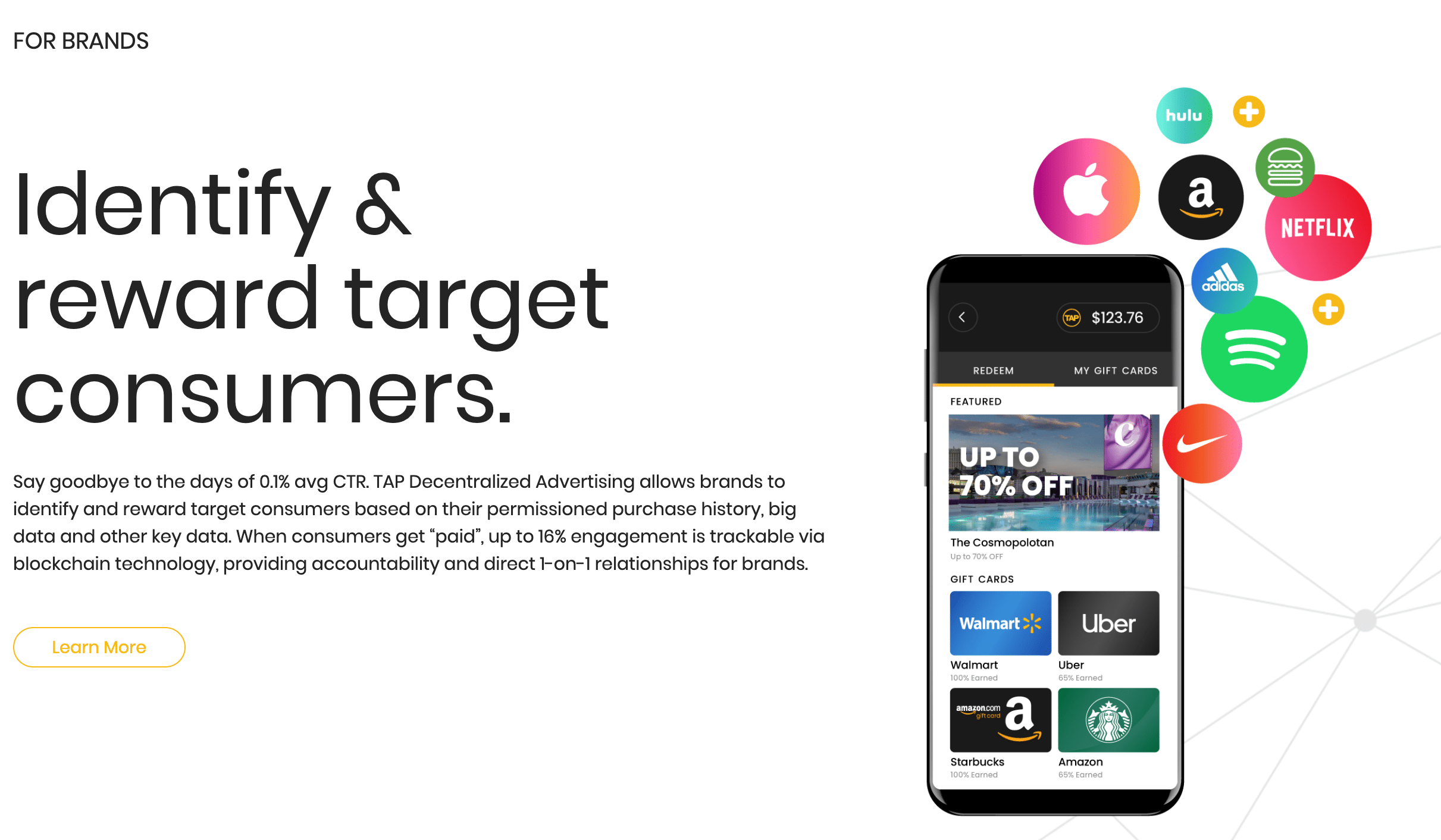 How does TAP plan to fix the digital advertising landscape?

If your data will be touched, you should be compensated. You should have full control over who has access to your data. You can say, it’s my data and I don’t want to share it with a specific brand or person.

We started an experiment with Hooch, a rewards app that rewarded people with free drinks. They would get one free drink per week as long as they shared their purchase data.

We used the OpenFinance API, which allows them to connect all their credit and debit cards to us. Then, we’re able to scan their transactions and understand their purchases. For example, if you’re an active bargoer, and that data is supported by your transaction history, you’re a very valuable person to target for alcohol companies. They’ll reward you and compete for your business.

Drinks were a clunky denomination of rewards. We decided to evolve into a full rewards program where users could accumulate rewards points for anything from a $5 coffee or a $500 hotel room.

Rewards points is a concept many people already understand. They can easily convert $20 in TAP with vendors in the network.

Have you guys raised capital yet?

Hooch developed the TAP technology and its network, and as of its Series Seed round has raised $7.8m. We are in discussions with VCs and strategic investors about a Series A round early 2020.

Where does blockchain come into play?

An overwhelming number of consumers started sharing their data. Our hypothesis was that only 20% of our users would share their data, but about 80% of people shared it. Blockchain came into play because we wanted to secure this data responsibly.

We wanted to allow users to delegate their data without sharing any personal information. It’s done with a token connection with the issuing bank, similar to how Mint and Acorn use similar APIs. We don’t record card numbers and names. They are not linked or traced back to you.

You’re assigned a blockchain wallet address, your pseudo-identifier in our system.

How do you guys make money?

When you make a purchase with them, it’s either tracked with a digital link or detected from the card. We can detect the wallet personally. Those partners pay TAP Network for driving that sale. About 50% of what we receive is converted into TAP Coin ( a stablecoin pegged to USD) and deposited into the user’s wallet.

We wanted to build a project for the mass consumer, so their rewards have to be easily converted to something tangible they can use rather than some obscure confusing token.

If you’re a consumer, you’d download the Hooch app and link any number of debit and credit cards. The app starts detecting purchases. If you go to one of our partner merchants, let’s say Starbucks, we detect a transaction is made with that partner. Once the transaction is verified, the TAP Network receives a commission from that partner. Then, part of that commission is deposited into a user’s wallet.

**Editor’s note: The link included is an affiliate link that gets you $5 in TAP. **

On the merchant side, it’s all about owning the relationship with your customer. In the early Facebook days, Facebook would tell someone like Pepsi to bring their audience on the Facebook platform because they can do a lot of cool stuff like target them in different ways and learn so much more about them. Years later, they flipped the script. They changed their algorithm so companies could only reach a small % of their own audience and would have to pay Facebook to reach the rest. It’s one of the biggest corporate bait and switches ever.

Merchant partners are incentivized to build their own direct channels with their customer data.

What’s the future hold for TAP?

We have a plan to reach 30 million users over the next two years.

We’re doing that by working with existing enterprises such as major media and entertainment companies to license and label our technology in their own name.

We want to go to these companies and tell them we have a way to have their consumers send their data directly to them. They can white-label a rewards program in their own name within 60-90 days, which would take them maybe 2 years to build out internally.

We have our first white-label launch mid-November so that’s really exciting. It’s a company in the entertainment industry with 10m+ users. We want to scale to tens of millions of users very quickly.

We want to help usher in the second wave of consumers and do our part in bringing blockchain to the masses.