Tim Draper is Bullish on Blockchain

In a speech earlier today in front of his own Draper U, prolific tech investor Tim Draper made some predictions about the impact of Bitcoin and blockchain technology on various industries in the near future. Among these was his expectation that a Bitcoin will be worth $250,000 by 2022.

No Industry is Safe

In regard to healthcare, Tim sees all of your medical data, from fitbit data to genetic information, moving to the cloud powered by blockchain. There, it will be securely stored and always accessible, easily shared with those who need it and easily protected from those who do not. Artificial intelligence and deep learning technology will then be applied and will process this info, becoming your “your doctor of the future”.

In the realm of finance, we’ve already seen massive changes. ICO activity (Initial Coin Offerings, or the sale of cryptocurrency tokens to bootstrap projects) has already exploded and surpassed traditional venture capital when it comes to total money raised. Tim believes in Bitcoin as the new go-to currency for the world, calling it “ a better coin than the Dollar, than the Yen.”

How we do business will change as well, according to Draper. Paying employees, raising money and budgeting will all be done without a lawyer or accountant by moving these activities to smart blockchain-based systems.

Add to this how blockchain promises to change industries like gaming and art, and you get a sense that this blockchain thing is sort of a big deal.

Government Will Feel the Blockchain Burn

The US government is resisting, while other countries are leaning in, according to Draper. This means that other countries are going to make up ground on the US when it comes to wealth and influence. “Start looking at your government like you look at your… cell phone manufacturer,” challenges Draper, “Make them compete for you.” 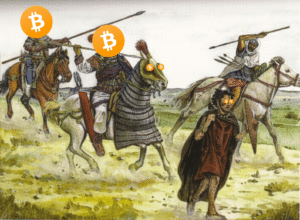 What is the Byzantine Generals Problem? | CoinCentral