What is the Environmental Impact of Bitcoin Mining? Bitcoin has radically changed the payment model for worldwide transactions. So far in 2018, the number of transactions has ranged between the 150 000 and 400 000 per day level. But now, as more and more people worldwide start using Satoshi Nakamoto’s controversial creation, serious questions are being raised about the bitcoin environmental impact.

Bitcoin Mining in a Nutshell

Bitcoin uses an algorithm called proof-of-work to validate transactions on its network. Miners do this work by committing resources to solving complex mathematical puzzles. When each puzzle is solved a miner is allowed to add a new block to the Bitcoin public ledger. The network then releases newly created Bitcoin and rewards the miner for doing this work.

By design, the network continues to incentivize those who commit the most resources to validating and securing the network. And, as you can imagine, these resources require a large amount of electricity to run.

Digiconomist estimates that the current Bitcoin and Bitcoin Cash energy use (at time of publication) is around 70 terawatt hours per year. We use watts to measure the rate of consumption in a circuit, or in this case, the Bitcoin network. 1 Terawatt is equal to 1 trillion watts (units of energy). In practical terms, this means that Bitcoin miners use more electricity than the entire countries of Switzerland or the Czech Republic. 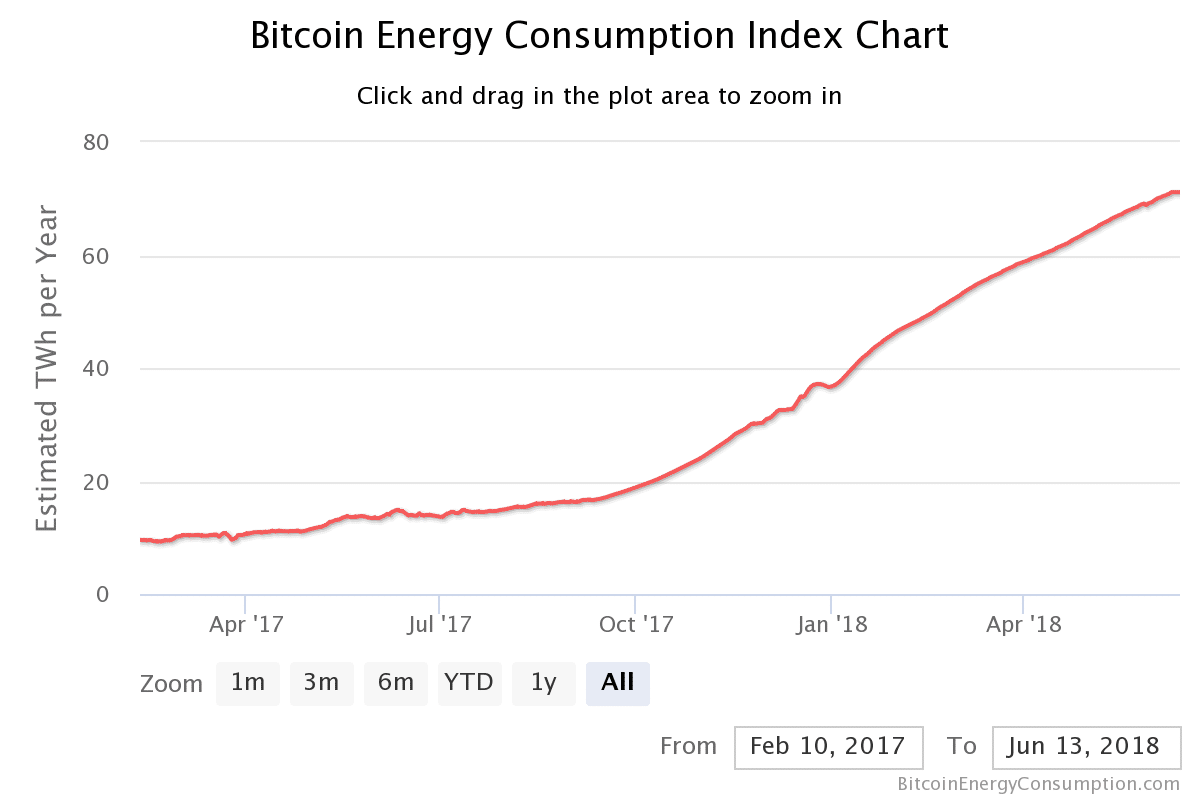 Of course, opinions differ on the actual usage in the Bitcoin network. Marc Bevand, an early bitcoin adopter, and miner, through his own research, came to several other conclusions:

In early January (around the peak of Bitcoin transactions for 2018) Marc’s “best guess” for consumption was around 18.4 terawatt hours per year. For now, it seems that estimation really is in the eye of the beholder.

As highlighted above, the use of renewable energy sources remains an important factor moving forward. Bitcoin miners, just like any other industry, are driven by profit. And they are setting up shop in cheap electricity locations.

As many of our savvy readers are aware, there are a large number of mining operations in China. The world is well aware of China’s coal-based pollution problems, but the People’s Republic is pushing hard on the renewable energy front: Note the projected crossover of prices in 2021 above. The cost of electricity production from renewable energy sources will drop below that of fossil fuels and be dramatically cheaper in the future. The incentive for bitcoin miners to use renewable energy now, and in the future is obvious. Hydroelectric and geothermal power are firm favorites with large-scale miners. Both the carbon footprint and electrical expenses are lower with these sources.

While the environment debate rages on in 2018, 10 years from now, it might not just matter that much.

What is Our Current Environmental Impact?

Mainstream media views the bitcoin environmental impact largely in a negative way. But how does this stack up with our current banking systems? In a 2014 study, Hass McCook argued strongly in favor of the sustainability of the bitcoin network:

“Widely available public information strongly refutes claims that Bitcoin is unsustainable, and shows that the social, environmental and economic impacts are a minuscule fraction of the impacts that the legacy wealth and monetary systems have on our society and environment.” Some of the heaviest electrical users in the global banking system include:

This is by no means a complete list. With much of the current banking system under threat, many of these hidden costs would most likely vanish under a much more efficient system.

Should Bitcoin Change its Consensus Protocol?

A number of developers and influencers in the cryptocurrency space are calling for a move from proof-of-work to proof-of-stake.

The main difference in a proof-of-stake system is that forgers, not miners are responsible for validating transactions on the network. How do they do this? Forgers will lock up cryptocurrency in a wallet for a certain amount of time. The network will then decide when that forger is needed to validate transactions and create the next block in the blockchain. Since math puzzles are not needed, energy heavy hardware is not needed either. As you can see, this requires far less energy consumption compared to proof-of-work.

This all sounds good in theory but there’s a problem. And it’s a big one. Proof-of-stake is largely unproven! The Bitcoin network has never been hacked, despite its energy concerns. 9 Years of solid network operation provides an excellent test case for securing blockchains. Proof-of-work requires hard work and this hard work results in the most secure blockchain on the planet. This is perhaps the most important aspect for a cryptocurrency to function in the long run.

That doesn’t mean proof-of-stake doesn’t have a shot. Instead, developers have an incredibly high-security standard to aim for.

We’ve explored a few ideas here on both sides of the bitcoin environmental debate. There are no absolute ways for measuring electricity use in proof-of-work systems. The current banking system seems even harder to measure than Bitcoin. Technology’s impact on the environment is a real-world issue. We may see a whole new industry emerge to accurately track our impact.

In the following Q & A, Bitcoin expert Andreas Antonopolous provides some serious food for thought on why Earth could probably only handle one proof-of-work system:

It’s interesting to note that Andreas believes Bitcoin is actually driving a decentralized energy revolution along with it. We see this today as more and more people go off-grid and become energy independent. Figuring out bitcoin’s environmental impact on the future is firmly on the mind of many cryptocurrency developers. Perhaps the only thing we can be sure of, for now, is that the debate will continue.