Bitcoin Futures Trading: What You Need to Know

The prospect of bitcoin futures trading on major financial exchanges has clearly been bullish for the price of bitcoin. The price at the beginning of this week, hovering around $15,000, is 145% higher than when CME Group announced on October 31 that it would launch bitcoin futures trading by the end of the year, and 53% higher than when news broke of the CFTC’s regulatory approval of these markets on December 1. 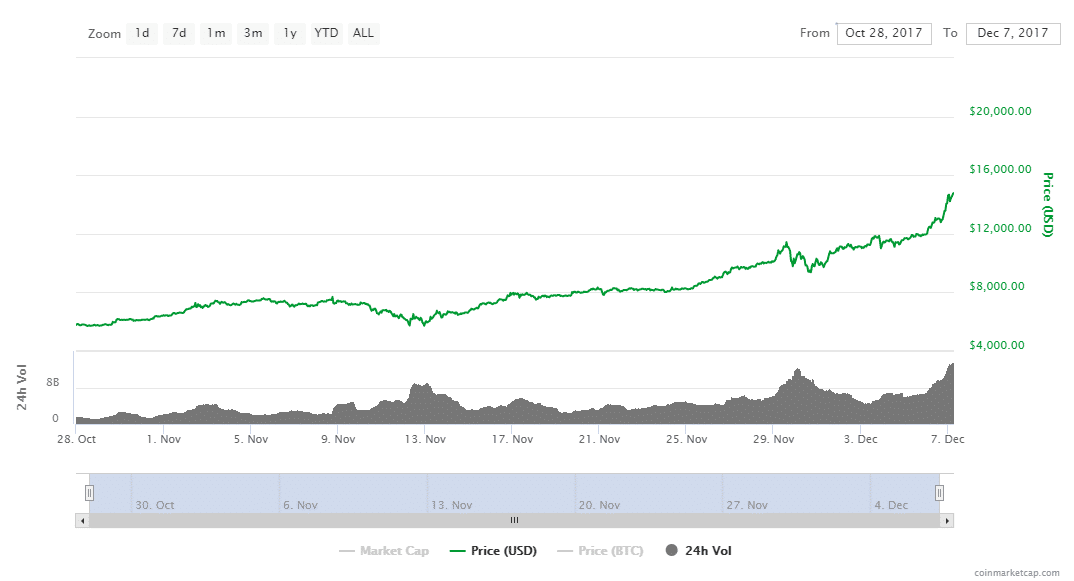 But how will futures trading affect bitcoin’s price once it’s launched, especially if institutional capital enters the space? To find out we’ll examine how a futures contract works, as well as the motivations and behaviors of the various players who may speculate on the price of bitcoin using futures.

The Basics of Futures Trading

First, a quick primer on futures contracts and how they trade. A futures contract is a financial derivative in which two parties agree to trade a certain good or financial instrument at a future date and at a set price.

For example, buying a 12-month oil futures contract for $60 means you (the contract holder) agree to buy oil at $60/barrel 12 months from now, regardless of what the price of oil is at that time. By agreeing to buy the oil you are “long” the contract, while the person who agrees to deliver the oil then is “short” the contract. Note that futures contracts can be sold at any time on an exchange that trades that particular contract, and the buyer of the contract would then inherit the obligation of the futures contract.

Some contracts can be settled by physically delivering the oil, some allow to settle with cash for the difference between the futures price and the spot price at that time, and some allow both options. Bitcoin futures to be traded on the CME are structured for cash settlement.

Here’s an example of how a bitcoin futures contract on the CME would trade. I buy a BTC futures 12-month contract with a $15,000 settlement price. Let’s assume that on that day 12 months from now, the actual price of BTC is $18,000.

Instead of the seller of the contract selling me a bitcoin for $15,000 and me taking it to an exchange to sell it for $18,000, the contract seller will simply give me the $3,000 difference. This is known as a cash settlement, and usually, the financial result is effectively the same as physical delivery.

The risk: could big investors short futures and tank the price of BTC?

Even if the average crypto investor understands futures trading, they won’t be entering this arena anytime soon; each contract is for 5 bitcoin, and the minimum block of contracts in a trade is 5 contracts. At a $15,000 BTC price, that means you won’t be making any trades for less than $375,000.

A key feature of a futures market is that it’s bidirectional, meaning that you can be short the market without the hassle of engaging in a traditional short position (i.e. finding someone to borrow the asset from).

Since the bitcoin futures contracts will be cash settled, betting against bitcoin is now much simpler (though there are a few existing ways to short bitcoin).

Institutional capital tends to be skeptical of bitcoin at best, judging by the statements of Jamie Dimon, Warren Buffett, or Mohamed El-Erian. This shouldn’t be surprising since in many ways digital currencies are a competitor to the long-term business plans of these bankers and investors. These people are highly incentivized for bitcoin to fall in price, or fail entirely.

Add it all up, and bitcoin bulls might start getting a little nervous. The only groups with enough cash to trade these new futures markets are institutional capital, who by and large have a very negative view of bitcoin, and they are about to start trading on the first reliable exchange that will let them short bitcoin at scale!

One could argue there is an enthusiasm gap in play here; if you are a crypto believer with capital, you already went off to start one of the dozens of crypto hedge funds in operation today. For a bitcoin skeptic, your options to express that view just expanded greatly.

First, institutional capital can think bitcoin is the biggest scam since the Dot Com Bubble, but much of it can’t touch these markets to begin with. The Volcker Rule of the Dodd-Frank Act prohibits banks like Jamie Dimon’s JP Morgan from engaging in speculative trading of almost every kind, of which the shorting of digital currencies definitely counts! The move for these bitcoin bears isn’t to short bitcoin, driving the price down, but merely steer clear of it and other digital currencies altogether.

Second, for every traditional hedge fund that can’t wait to short bitcoin, there are others who would love an opportunity to gain long bitcoin exposure but simply doesn’t trust the custody of crypto exchanges, or can’t handle the lack of technical support or constant downtime. (If you’ve ever tried to use a crypto exchange during a hard fork or major crypto news event, it’s hard to blame them).

Up until now, their options were limited to the Grayscale Bitcoin Investment Trust (GBTC) which frequently trades at a 30% to 80% premium to actual bitcoin, showing there is significant demand from investors who, for whatever reason, are restricted from purchasing the actual bitcoins themselves. Lastly, few investors will look at bitcoin’s rise in price in the last year and have no fear of shorting the asset. When an asset can double in a week, your risk exposure with a short position is enormous – theoretically unlimited.

Perhaps you might believe that bitcoin is in a bubble because it can’t be valued using fundamental analysis, but that was true a year ago as well, and if you put on a short bitcoin position in December 2016 you would have lost about 17 times your initial investment (or in terms of futures trading, you would have been margin called and/or had your position forcibly closed long ago by your exchange).

With a minimum trade exposure of $375,000, those losses will add up pretty quickly.

Conclusion: Volatility ahead, but ultimately good for BTC

That doesn’t leave you with a clear decision on whether to go long or short bitcoin in anticipation of futures trading. CME Group’s will launch their bitcoin futures product on December 18, but their smaller rival CBOE recently announced they will beat CME to the punch and begin bitcoin futures trading on December 10th, this coming Sunday afternoon. Various factors could cause the influx of capital to take either long or short position, but either way, it will likely mean significant price swings in the short term.

However, in the long term, this is a significant step toward legitimizing bitcoin and other cryptocurrencies, and should eventually lower the daily volatility of bitcoin as it trades alongside more traditional asset classes. How to Short Bitcoin