Imagine a day when your car drives, parks, and refuels completely autonomously. While this may sound like the stuff of science fiction, the technology is already in the works. If the world’s major automakers have their way, blockchain will be steering a lot more than just the markets in the near future.

A quiet revolution occurred across the automotive sector this year as multiple manufacturers launched blockchain-based initiatives. These concepts ranged from logistical system updates to interconnected autonomous vehicles. Here are the top companies forging the new age of the blockchain automotive.

The goal of MOBI is to create a standardized blockchain network which all parties can utilize. This standardization will save auto manufacturers big time on research and development. Additionally, it allows the market to develop and innovate at a faster pace. MOBI is also interested in different ways to monetize the data you create when you operate your vehicle. This data can help advertisers create more impactful marketing strategies. It’s extremely valuable and gathering it is a priority of many of the large tech firms seen today.

Google, Amazon, and Apple all released automotive products this year, showing just how sought after the auto data market is. These products include Android Auto, Echo Auto and Apple CarPlay. As you probably already know, these companies use the data their products gather in a number of different ways. Blockchain technology could help drivers retain ownership rights to this data and free consumers from the data scalping business systems of today.

MOBI’s Chairman, Founder, and CEO, Chris Ballinger, recently discussed the importance of a blockchain standard within the automotive industry. He briefly touched on how the cars of the future need to be able to communicate, identify themselves, and makes payments via a standard set of protocols.

Ford looks to alleviate road congestion of the future with their latest blockchain patent. According to the patent filed in 2016, Ford engineers developed a “vehicle-to-vehicle cooperation” traffic marshall system. The system monitors drivers and other vehicles on the road through the use of data sharing via the blockchain technology.

The platform uses a Cooperatively Managed Merge and Pass (CMMP) system to monitor the activities of the road. CMMP tokens allow vehicles to communicate in real time. The blockchain stores all data that the vehicles gather. Interestingly, the system allows consumers (regular drivers) access to fast lanes, while merchant vehicles remain in slower moving traffic.

On June 28, 2017, Daimler, Mercedes’ parent company, officially entered the blockchain space in a major way. The company revealed the launch of a $110 million blockchain pilot program. Mercedes seeks to simplify the financial aspects of their business systems through the use of blockchain tech.

In February 2018, Porsche revealed a partnership with the blockchain-based firm XAIN. The partnership tested multiple applications for the technology including opening doors via a dapp and encrypting vehicle data logs. Data collected from the project showed that car doors open six-times faster when using a blockchain-based system.

In the future, drivers could temporarily allow access to their vehicles when they are not present. Imagine parcel delivery services leaving your package in your trunk when you’re not home. Oliver Döring, Porsche’s Financial Strategist, says that blockchain technology gives their clients greater “peace of mind.” The company has also explored integrating blockchain into their auditing process.

BMW company executives turned to blockchain technology to better monitor the mileage of their fleet of leased vehicles. The company partnered with the blockchain-startup DOVU via BMW’s Innovation Lab. The developers behind this project want drivers to get paid for their data contributions.

The concept is simple. BMW preprograms token rewards into their blockchain smart contracts. Drivers earn tokens for participating in the DOVU system and accomplishing the required tasks. Once they earn a certain amount of tokens, they can trade in their tokens for automotive services such as repairs, upgrades, or even a new set of tires.

Electric car provider Tesla and the popular cryptocurrency EOS revealed a strategic partnership in April of this year. The goal of the project is to explore the integration of the Internet of Things (IoT) into Tesla’s already successful autonomous vehicle program. 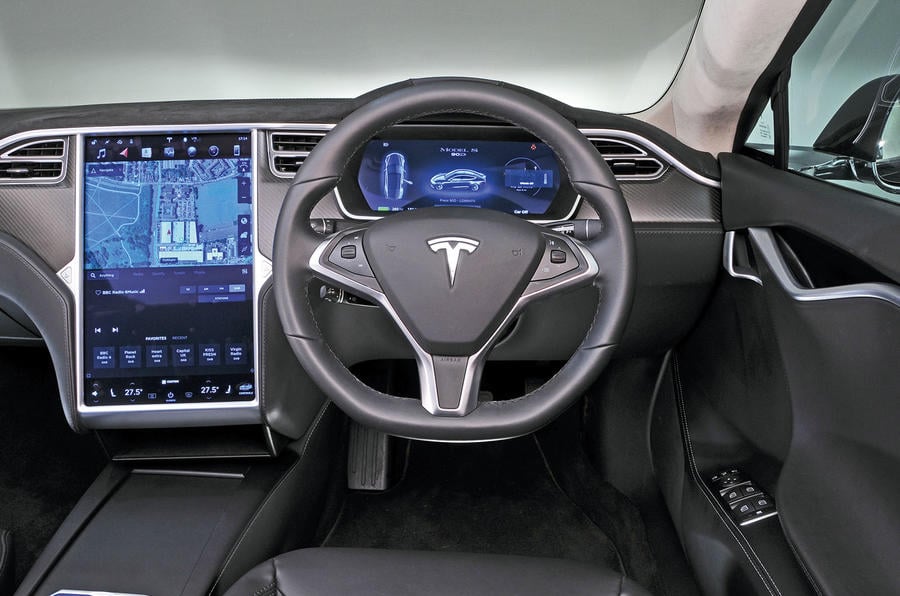 If the project is successful, your Tesla could become a lot more helpful in the coming years. Imagine your car cruising to the store to grab you another gallon of milk because your smart fridge told the vehicle you were running low. Sounds like science fiction but with IoT all of this and more is possible.

Tesloop CEO and co-founder Rahul Sonnad explained that Tesla’s ride-sharing cars would participate in the project at first. This strategy is gradual, as this is a very small percentage of the Teslas on the road. He explained that IoT still has data processing limitations that must be overcome before the project is set into full swing.

For now, the vehicles just add the data to the EOS blockchain. This data includes location, speed, vehicle performance, and other relevant information. Tesla hopes to take this information and improve the efficiency of their current autonomous driving systems.

DAV Tokens register all vehicle activity and data on the blockchain. This information allows vehicles to accomplish some pretty cool things. Aside from self-driving, DAV powered cars could reserve parking spots at your planned destination, track road closures, reroute, and automatically refuel. Speaking publicly, the company’s CTO and co-founder, Tal Ater, called decentralization the “key to the future of transportation.”

DAV provides startups with the ability to develop new technologies utilizing the platform’s network. This is an important feature as mega providers such as Uber look to monopolize the autonomous vehicle space.

Blockchain Automotive: A Match Made in Heaven

Blockchain technology will transform the automotive industry in ways that seemed impossible just ten years prior. The cars of the future won’t run on gas, they’ll run on data, and blockchain will be the roads they travel. The day is quickly approaching where the classic TV series Knight Rider will be considered nothing more than a show about a normal car.