OPEN is offering the first blockchain payments infrastructure for applications.

This infrastructure allows applications to handle onchain transactions and update off-chain data tables. Open Platform claims to empower application developers to use blockchain in languages they are comfortable. Developers can build in any language they are comfortable with using OPEN API.  Any sort of language coding can use OPEN for a variety of use cases. This project would essentially allow applications to accept payments in a variety of cryptocurrencies at a much faster rate than the current technology allows.

Developers can use OPEN to port their application to any blockchain.

While the project does have quite a few moving parts and it’s worth taking a deeper dive into the OPEN whitepaper, here are a few key terms:

OPENWallet: The storage unit for the user’s cryptocurrencies (BTC, ETH, NEO, etc.), as well as the OPEN_States users have purchased through the OPEN API.

Developer Wallet: The address where the Scaffold transfers funds sent by users for an OPEN_STATE. OPEN allows developers to use whatever wallet they want, but it’s recommended to use the OPENWallet because it uses the OmiseGO SDK, which as its own built-in decentralized cryptocurrency exchange. This allows developers to convert Scaffold transfers into any cryptocurrency they want or fiat.

OPEN Token: The token native to the platform is an ERC20 distributed in the OPEN TGE, allowing developers to create and operate Scaffolds in the OPEN ecosystem.

Scaffold: This is simply the template smart contract created by developers and uses application-specific information (like the pricing scheme and number of gems on the network). The Scaffold becomes active when it is staked with a set amount of OPEN Tokens, which means these tokens are tied up within the Scaffold in order for it to run. The Scaffold needs the Open tokens to run, but are returned to the developer when it is deactivated. Scaffolds create the OPEN_States for the developer’s application. 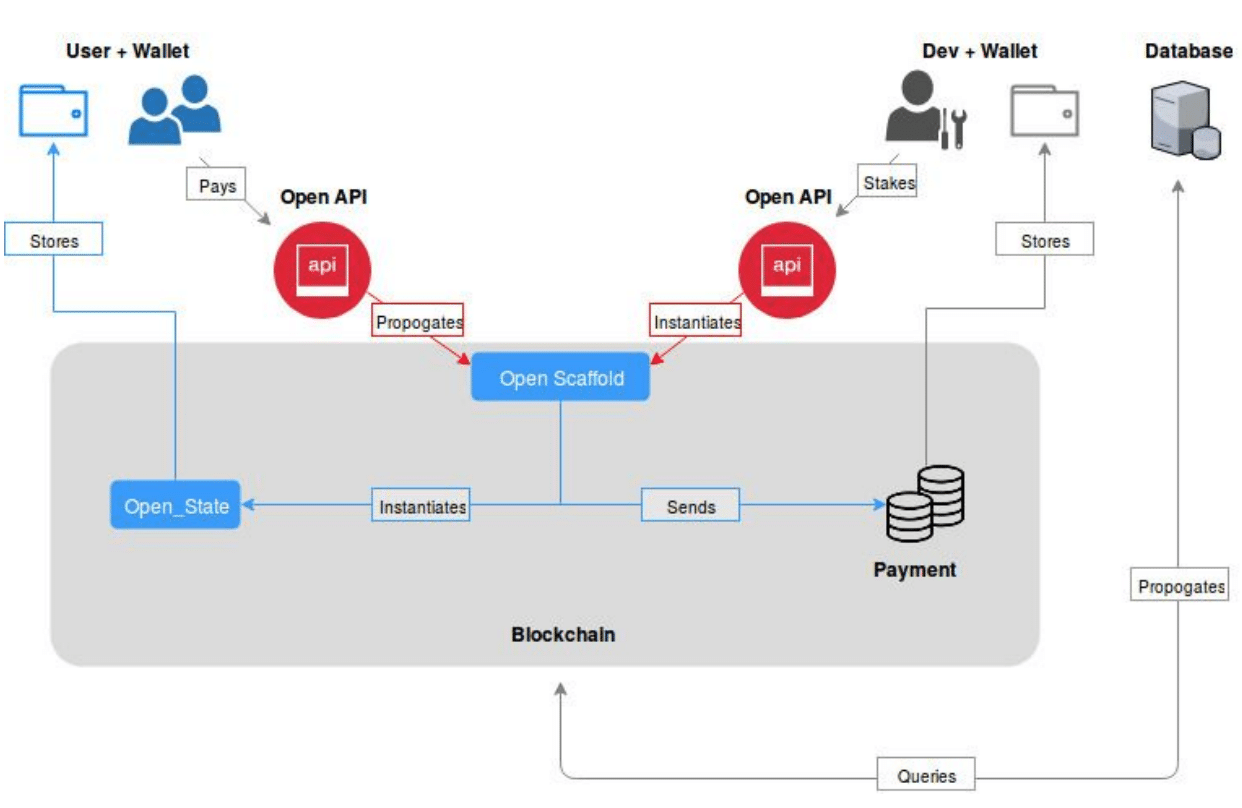 The OPEN team lends a broad range of deep experiences in app development and app marketing.

The CEO Ken Sangha has experience in scaling a casino app development company to 8 figures and has been a mentor to 20+ tech related accelerators.

The CTO Andrew Leung has experience as Lead Architect and Design for Grindr, a dating app with over 50 million downloads. He also led the engineering team for Facebook’s Blackberry 10 OS and helped scale it to over 1 million users.

The Blockchain Lead Abhishek Punia is a Crypto Analyst at Draper Associates and a Core Contributor to Enigma (which recently ICO’d for $45 million).

A refreshing part of the OPEN ICO is the hard dates the team has set for deliverables, which is a pleasant change from the more opaque “By Q3 2018” we’ve seen with many other projects.

Developers can expect to start using OPEN 1.0 as early as July 2018.

Even for the majority of developers, blockchain is still a fairly complicated concept.

Dozens of startups that have recently pivoted to blockchain are stuck researching new languages and new ways to integrate blockchain into their existing systems. As a relatively new technology (at least for the mass market), blockchain still presents a wide array of challenges for existing applications.

What stands out about Open is that it’s the first blockchain payments infrastructure for applications. This would allow dozens of entrepreneurs in the blockchain space to integrate payments, the core of most of their business plans’, seamlessly into their app. That’s pretty big news not just for developers, but for the cryptocurrency community at large.

If OPEN is successful in releasing the expected deliverables and onboarding a sufficient amount of developers to use the application, it could cement a stronghold as a key infrastructural component in the blockchain development industry.