When Ikigai Asset Management Founder Travis Kling fell into the cryptocurrency rabbit hole, he fell hard. When he started reading into Bitcoin in the fall of 2016, Kling began to tap into the knowledge of the Internet and venture into concepts like Byzantine Fault Tolerance, Zero Knowledge Proofs, Merkle Trees, and more. He began to see incredible value in the concepts of trustless/permissionless ledgers, crypto economics, open source software, and hard forks all stacked up together. At the time, Kling was a Portfolio Manager($200mm) at the hedge fund of billionaire Steven A. Cohen Point72. The traditional finance world circa late-2017 wasn’t exactly eager to fully explore the potential of cryptocurrency as an asset class, other than potentially exploiting its radical speculative spikes and drops.

Could you go over the transition from being an Asset Manager at Point72 into Founding Ikigai?

My partners and I have built Ikigai from scratch. While certainly a LOT of work, this has allowed us to architect and implement a culture wholly unique to Ikigai, which we believe is a significant competitive advantage that will sustain for years to come. Said differently, we have built an environment that fosters excellence and is highly conducive for generating attractive risk-adjusted returns on a repeatable basis.

The Cryptoasset industry moves faster than anything I’ve ever seen. Everything about this field moves at a superlinear pace, fueled by a primarily open-source technology base. Technological progress occurs in an evolutionary, Darwinian, manner. The space evolves as a Cambrian explosion.

This is a new asset class being built around a transformational information protocol, which will serve to rearchitect the foundational layer of the internet and create trillions of dollars of value in the process.

The specific way in which that value creation will play out is currently unknowable, and the specific manner in which value will accrue is uncertain. As such, for Cryptoasset investing, “true north” for value is much less fully understood than in traditional asset classes like equities. There aren’t metrics based on revenues/cash flows/earnings/assets for Cryptoassets. Nothing written about Cryptoasset valuation is older than 18-24 months, whereas equities valuation has been around for over 100 years.

Quantitative data is limited and difficult to aggregate. The data we do have is in many cases incomplete, inaccurate, or incomparable period-over-period. Infrastructure is similarly limited.

There is too much to know and too much that is unknowable to truly be an “expert” on Cryptoasset across the board. Crypto investing is informed by studying Cryptography, Computer Science, Economics, Engineering, Trading, Game Theory, Governance, Regulations, Philosophy, Emerging Technologies and many other fields. This diversity of inputs in the investing process and the dynamic landscape makes the incumbency advantage relatively small compared to traditional asset classes.

What made you guys choose the name Ikigai?

I came across the Ikigai Venn diagram last year. The concept really stuck with me. I was reminded of it earlier this year and it struck a personal chord with me. Ikigai is the combination of 1- what you like to do 2- what you’re good at 3- what you deserve to be paid for and 4- what the world needs. 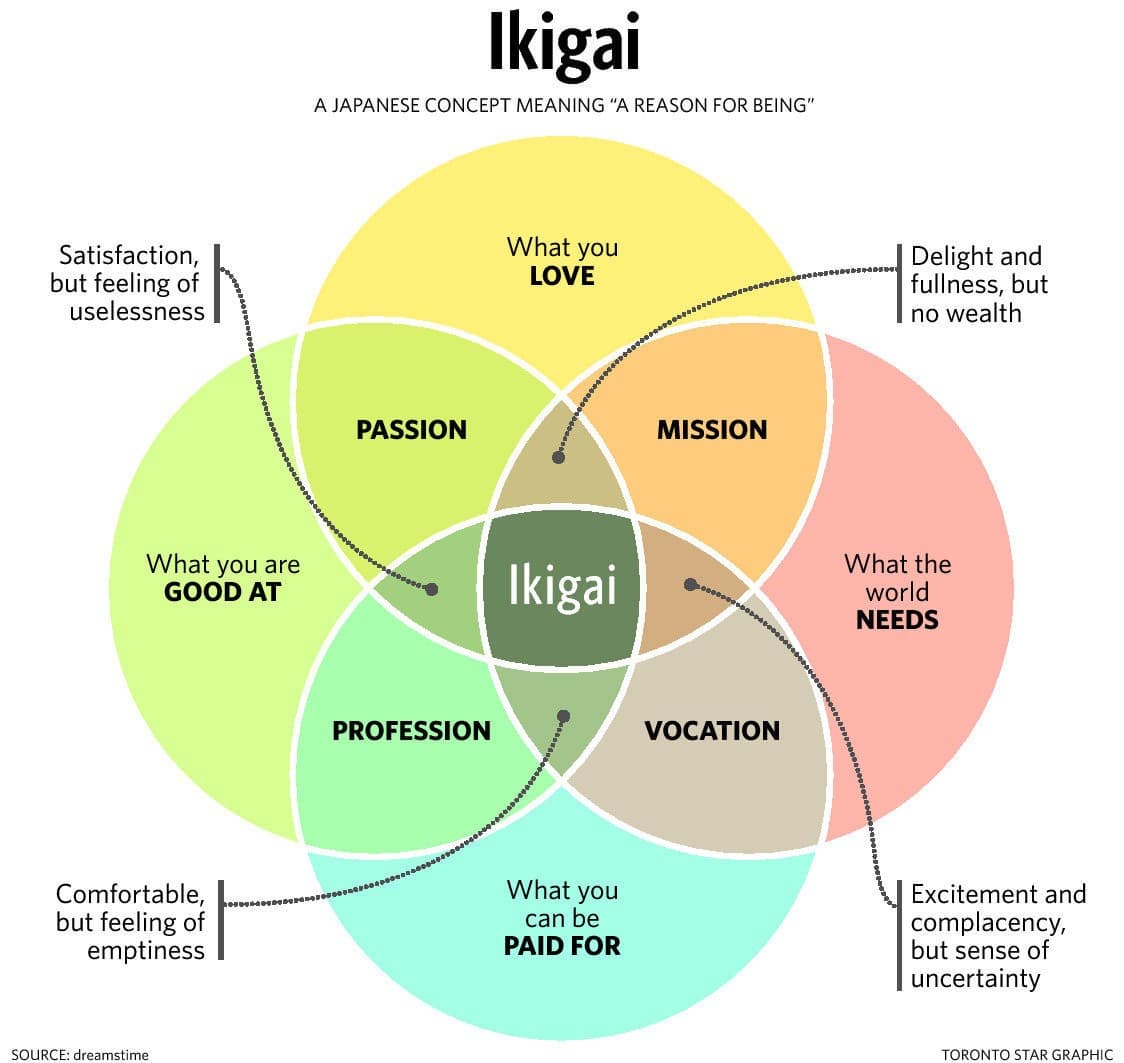 What are some of the largest contrasts between traditional investment strategies and cryptocurrency?

Much less concept of “true north”- there are many potentially right answers and there’s no way to currently be sure which answer will be the right answer in the long run.

A Cryptoasset is not equity (in most cases). It is not a legal claim on revenues/earnings/assets/cash flows. Equity has been the instrument facilitating value accrual through investment since the 1600’s and we are currently attempting to create a new value accrual mechanism, whereby a token has an implicit claim on Network Effect, with token structure serving as bridge between the value created by the technology and the value accrued by the token.

How do you see the relationship between quantitative analysis and the relatively new cryptocurrency?

Because we cannot use many of the valuation methodologies that have persisted in traditional asset class investing, we must seek to identify the data that we do have that may help make better investment decisions. In many cases, this data is “crypto-native” and does not exist for traditional asset classes. This may include Order Book information, Active Wallet Addresses, Transactions per Day, Mempool, Hashrate, Community Vibrancy metrics, Wallet Forensics, and many other sources.

Also, Technical Analysis plays a more prominent role in Crypto than in traditional asset classes. That vast majority of Crypto price action is a function of speculation, as there is currently very little usage of the technology for its intended use cases. Speculation is a function of fear and greed. TA is the quantification of fear and greed. Thus, tracking TA for Cryptoassets is an important source of quantitative data for alpha generation.

What’s the biggest mistake you see projects making today, and how can they avoid it?

The space as a whole has a tendency to try and walk before it crawls, or in some cases, run wind sprints before it crawls. The most foundational piece of this ecosystem isn’t set in stone yet. Many projects are trying to raise money for use cases that require infrastructure and base layers in place to execute that are years away. It’s like first discovering concrete to build roads with and immediately pitching an idea for a flying car. We could use more people focused on pouring concrete to build roads before thinking about flying cars.

Let’s entertain the Bitcoin maximalist idea that in the long-term Bitcoin and its second layer solutions will wipe out the majority of altcoins. How does a cryptocurrency hedge fund approach this risk?

I cannot speak for other funds but I believe many funds are not positioned to realize this event and act accordingly, should it happen. Ikigai’s active portfolio management approach is built on the Four Foundations of 1- Qualitative Research; 2- Fundamental Valuation; 3- Quantitative Tools; and 4- Event Driven Catalysts.

Those Four Foundations give us courtside tickets to the basketball game. While we don’t know which team is going to win, and the team that may end up winning the entire championship may not have even been born yet, we believe if we have clear visions into those Four Foundations, we’re going to know it when we see it, see it early, and be able to deploy capital accordingly.

We have full flexibility in our investment mandate. We can place the entire fund a long BTC position if that’s what the Four Foundations are telling us to do. We are ready and willing to deploy capital in whichever manner will generate the most attractive risk-adjusted returns, and if that means a single long BTC position because we are witnessing “hyperbitcoinization”, then so be it.

Could you go over your 3 core goals and how they reveal some of these multitrillion-dollar opportunities?

With that as the backdrop, we see a multi-trillion dollar opportunity for 1- beta value capture; 2- alpha value creation; and 3- negative alpha value destruction. #1 addresses the rising tide that lifts all boats. This tide will rise significantly over the next several years. We have a high degree of confidence that Cryptossets will be the best performing asset class over the next 5-10 years. #2 addresses that certain boats will rise orders of magnitude higher than the general tide.

There will be some enormous winners as this asset class matures and the foundational pieces get solidified into place. #3 addresses that many many of these projects, likely 90%+ will end up being effectively worth zero, and if you choose to invest in these projects, you will lose all of your money.

Ikigai seeks to gain exposure to #1 and #2, while avoiding #3. Our Four Foundations, coupled with a flexible investment mandate and a multistrategy approach, gives us the ability to generate superior risk-adjusted returns on a repeatable basis in the context of a broadly, directionally, strongly bullish outlook with a high degree of uncertainty around the specificity of how that bullishness will play out.

Can you describe the pre-ICO investing landscape? Is it possible for average investors to get similar access to the same deal flows as funds?

The average investor will not get access to the same ICOs at same stage as high quality, reputable Crypto funds.

If you do diligence 20 ICO projects, 17 you say no to in the first hour of diligence. The 18th and 19th ones you like but they need some work. The 20th one you really like but so does everyone else, so you don’t get capacity on the deal because it is oversubscribed.

Ikigai differentiates itself from others trying to “write a check” into that 20th deal by providing tangible value beyond dollars. Ikigai can advise on technical best practices and accelerate partnerships. We can advise on token structure in the context of value capture. Ikigai can help develop a go-to-market strategy. Ikigai can tell others in the Cryptoasset investing community why we like a project enough to invest in it.

By providing value to relationships with these lighthouses, Ikigai facilitates dealflow in the most attractive seed-stage Cryptoasset investment opportunities, driving value creation.

Network Effect us said to exist when the value of a technology increases the more people use it. The telephone or a social network are two easily understandable examples.

Every technology that derives a significant portion of its value from Network Effect is exposed to the Bootstrapping Problem, where you have to figure out how to get from 0 users to 1mm or 5mm or 20mm or whatever the number is to hit the tipping point where the average utility enjoyed by the user is compelling enough for the technology to stand up on its own merit relative to the status quo.

The emergence of Cryptoassets fundamentally changes the relationship between a technology and its Network Effect. The token associated with the technology allows for a Speculator to stand at T=0 and look out into the future and make a bet about what the value of a technology might be one day if enough people come to the technology.

Through speculation, the Speculator receives Financial Utility (potential for future profits), which takes the place of the lower Application Utility received by the User. In this way, the Speculator is able and incentivized to pull a technology up the bootstrapping phase into existence. That has never been available in the history of anything. That is revolutionary.

What should a qualified investor look for in a hedge fund, beyond marketing platitudes? A Guide to the UK-based Indacoin Cryptocurrency Exchange