Keep on the lookout Mavericks fans, you could potentially be paying for your next ticket in cryptocurrency.

Shark Tank star and Dallas Mavericks team owner Mark Cuban says that next season, fans will be able to purchase tickets in Bitcoin. Relaying the information directly from Cubans Twitter, the Billionaire responded to a followers question that asked when the team would start accepting Bitcoin. 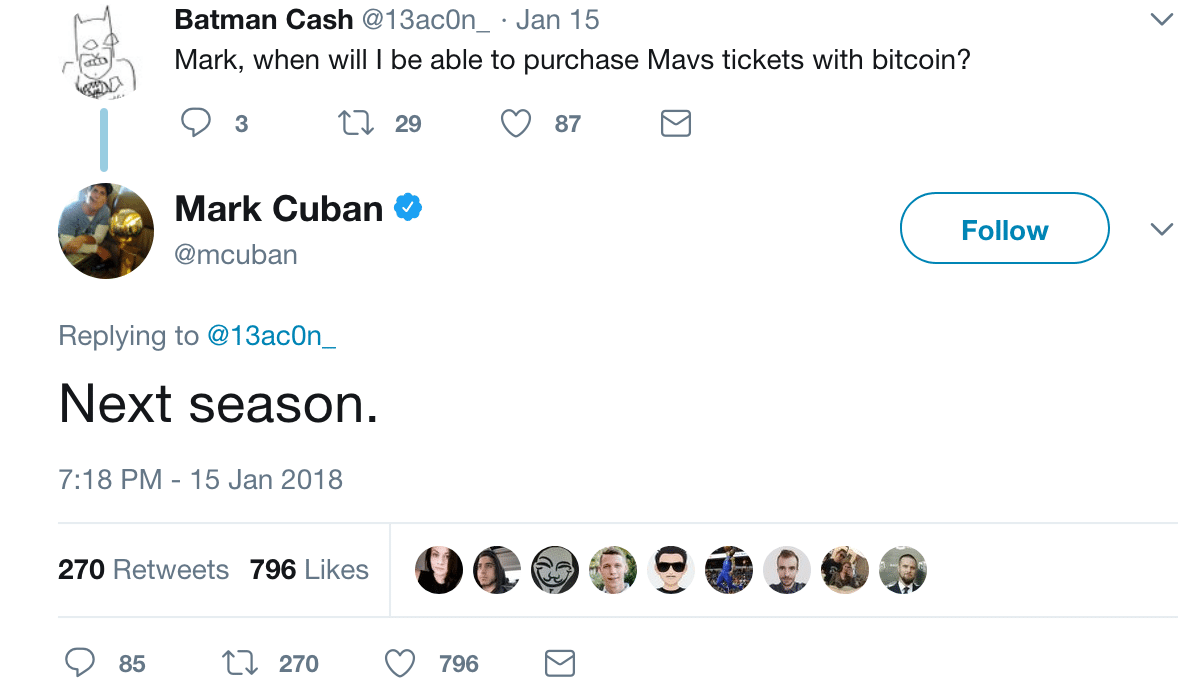 According to CoinDesk, Cuban stated that the team “will accept BTC, Eth, possibly some other currencies. [That’s] to be determined.” The move is a bit surprising from the tech enthusiast who in the summer of 2017 referred to Bitcoin as a “bubble” waiting to burst. Granted, Cuban has been reported to become fonder of cryptocurrencies in general, including investing $20 million into them through a venture capital fund.

The move could be a game changer for both industries. Going in hand with the dream of the crypto community that cryptocurrency will be the future use of regular, everyday payments, we could potentially see salaries of athletes transacted in digital assets. If the initial launch is successful, salaried employees may reap the benefits of an asset that grows in value at astonishing rates compared to traditional forms (like stocks and bonds).

What Other Companies Accept Cryptocurrency?

Beyond the Dallas Mavericks, the team isn’t the only entity looking toward cryptocurrency for use cases in the business arena. Sites like Craigslist now allows users to list items with a “cryptocurrency ok” checkbox for payment acceptance options.

Love Wikipedia? Look into donating to the free online encyclopedia with cryptocurrency. Moving to a new apartment? Go to OverStock.com and pay for your furniture with Bitcoin. If you’re interested in purchasing on more platforms than what was mentioned above, take a look at this Inverse article highlighting companies that accept cryptocurrency (with big names like Microsoft and Etsy).

While the ability to purchase everyday items with cryptocurrency is still out of reach for the overall population right now, a snowball effect may slowly add business after business to the crypto market. However, as with the speculative nature and the overall downward turn of the market these past weeks, selling the idea could potentially prove more difficult than in earlier times. Until the market stabilizes, we may not see the mass adoption of using digital assets as payment options in the near future, but as with any visionary, looking ahead is the only way to survive the risky nature of the industry.