HoweyCoins are a hot, new cryptocurrency bound to disrupt the over $1.5 trillion travel sector. That’s right, trillion. With a “t”.

Like most other industries, the travel industry is just plain awful. Hotel rooms are too small, airplane legroom too short, and don’t even get me started on airport security lines. The corporations at the helm have been forced to cut corners wherever they can just to turn a profit with their archaic, centralized systems.

Enter HoweyCoins. The HoweyCoins team is decentralizing every aspect of travel on land, air, and sea through exclusive partnerships with all major players in the space. Unfortunately, these partnerships are currently under non-disclosure agreements (NDAs) but will be announced at a later time. This could be how you live in a post-HoweyCoins life.

In a true no-lose situation, you pay HoweyCoins to the network partners, and in turn, you receive HoweyCoin rewards. Let’s dig deeper.

Total Tokens: Enough for all

Available for Token Sale: As many as you want to buy

Know Your Customer (KYC): No

Accepts: Anything you’ve got

The utility of HoweyCoins is literally endless. They can be exchanged for travel points, other cryptocurrencies, cash, securities, airline miles, hotels, merchandise, or even other HoweyCoins.

Now, we could waste more time talking about the technology, but no one really cares about that stuff. Instead, let’s go over the important details – the Investing Discounting Ladder.

Wow, wow, wow. There’s never been an ICO discount deal like this.

Buy before June 1. Are you kidding me? Double 25% discount.

If you aren’t taking advantage of these discounts, well you’re just dumber than a dummy.

If you’re still worried about competition at this point, HoweyCoins aren’t for you. Big, safe Bitcoin won’t get you this type of return on investment. Ethereum? Snoozefest. HoweyCoins will make all of these cryptocurrencies look like bank-issued Monopoly money in comparison.

Rock solid team. PR/Marketing, travel strategist, partner development – this team’s got it all. Even more impressive, every team member is the head of their role, so you can be confident that they’re at the top of their game.

Influential testimonials. When @McWhortle and @realdrummerstar say, “Invest,” you say, “How much?” Now if they could only get support from @FloydMayweather… 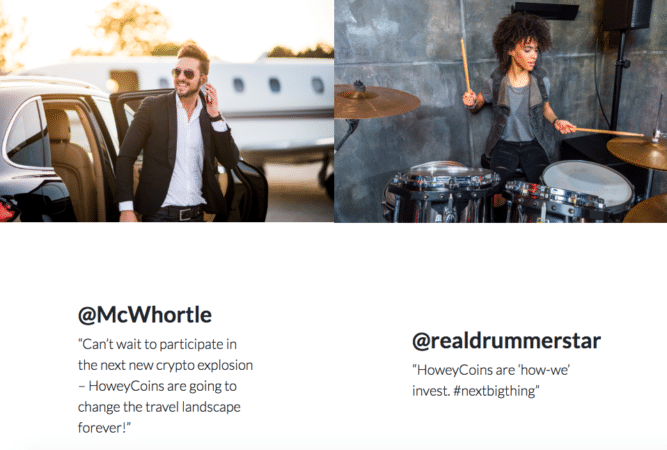 Guaranteed gains. Just take a look at their website. Over 1% daily gains and 225% post-pump returns. I like the sound of those numbers.

Boring white paper. Too many words, not enough pictures. It was difficult to do anything more than skim over the 9-page document. 9 pages?! Who do we look like – Warren Buffett?

Bland branding. What kind of name is “HoweyCoins” anyway? It’s missing all of the flash and pizazz you expect to see in an ICO. It’s as if a bunch of government bureaucrats made it.

Should I Invest in HoweyCoins?

Long answer: This is the investment opportunity of a lifetime. If you’ve been kicking yourself for not buying Bitcoin when that sketchy kid from high school told you to, this is your second chance. There’s no other asset in the world that can guarantee the same success that HoweyCoins can.

HoweyCoin is a next-level blockchain, changing traveling for the better. With HoweyCoins, we’ll finally live in an era when airline food rises above being the butt of second-rate jokes.

(Editor’s Note: This post was in no way, shape, or form paid for by the HoweyCoins team. wink wink)

The Best Ethereum Wallet Reviews for 2021