This Week in Cryptocurrency–March 16th, 2018 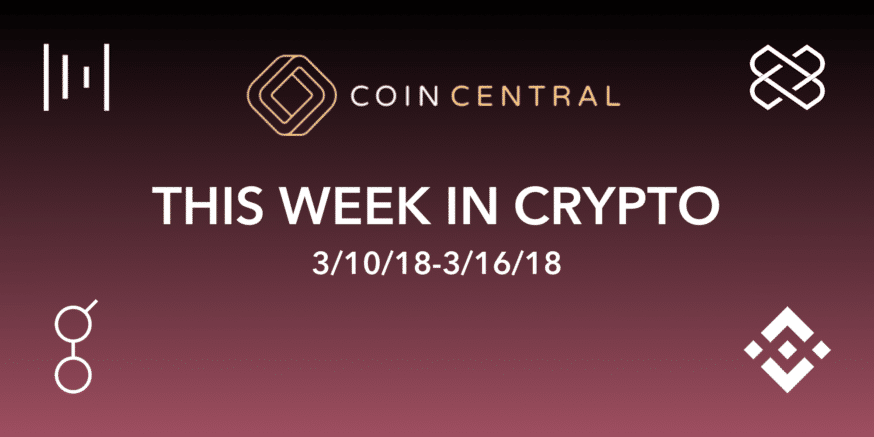 This Week in Cryptocurrency–March 16th, 2018

Just when we thought we were out of the pits, the cryptocurrency market throws us right back in.  Prices have been on a steady downtrend since crypto’s total market cap regained positive footing in the middle of last month.  On February 17th, the market’s capitalization was $519bln. Now, it’s valued at $336bln, a 35% drop on the month and a 7% drop on the week.

Could be tax season for US citizens, could be the FUD of Google banning crypto-related ads.  Regardless of the catalyst, the market is grade-A bearish at the moment, and it has us wondering if this is the continued verberations of February’s crash.

Bitcoin: With its price sitting around $8,500, Bitcoin is down 5.5% since last week.  Sure, not a devastating drop, but still not the kind of price action you want to see.

Ethereum: Crypto’s silver contender has little for a silver lining this week. Compared to Bitcoin, Ethereum is in double the trouble, with an 11% loss on the week at its current price of $619.

Ripple: Number three on our list is in the worst shape out of its peers, as Ripple is down 12% on the week at $0.70 per XRP. Crypto Comes to Congress–This Time, the House of Representatives: The United States House of Representatives held a formal hearing on cryptocurrencies on Wednesday this week.  Overseen by the Capital Markets, Securities, and Investments subcommittee, academics and industry leaders drove home crypto’s MO to US legislators, including Congressional Blockchain Caucus leader Tom Emmer.  The meeting served as a primer for congress members unaware of crypto regulatory status, with a special focus on ICOs.

Hedging Risks?  SEC Probes Cryptocurrency Hedge Funds: We know about the SEC’s beef with ICOs, but now, the US regulatory agency is going after crypto hedge funds.  In order to protect consumer interests, the SEC has requested information regarding fund security features, pricing models, and compliance among others, and some funds have apparently even received subpoenas from the SEC’s Enforcement Division.

Tennessee Legislators Push for Conflicting Bills on Crypto, Blockchain: For better or for worse, things are heating up down south for crypto.  Both the Tennessee State House and Senate are processing legislation that would ban retirement fund investments into crypto, but they also have bills on the table that would approve “the legal authority to use Blockchain technology and smart contracts in conducting electronic transactions” and would “[protect] ownership rights of certain information secured by Blockchain technology.”  Versions of both bills have passed in the Senate while the House has yet to vote on their versions of the legislation. Surprise, Suprise: Utility Tokens Offer Utility as a New Asset Class, According to Wyoming Legislature: In defiance with federal regulatory bodies who, in recent months, seem to be locked in a turf war over crypto’s legal classification, Wyoming is helping cryptocurrency forge its own path.  Wyoming House Bill 70 was signed into law this week, the first legislation in the world to recognize crypto as its own unique asset class. Caitlin Long, co-founder of the Wyoming Blockchain Coalition, hopes that the landmark legislation will “[set]an example of how this could become a standard under federal law.”

Circle Invest Now Available to US Citizens in 46 Countries: 2018 is shaping up to be an active year for blockchain-focused company Circle.  A month after the organization acquired Poloniex Exchange, the team has announced that they’ll be opening their new cryptocurrency investing platform, Circle Invest, for “early access” to US citizens in every state barring Minnesota, Hawaii, Wyoming, and New York (which they expect to add “very soon”).

The Petro Continues to Draw Disapproval from Legislators: If a modern day dictator decides to ride the crypto hype train, don’t be surprised when the rest of the political world disapproves.  Earlier this week, Florida Senator Bill Nelson sent a letter to Treasury Secretary Steven Mnuchin regarding Venezuela’s ICO for the petro, its state-sponsored cryptocurrency.  Nelson, along with other international politicians, is worried that Venezuelan president Nicolas Maduro will use the ICO funding to avoid sanctions and fund his regime. New Bill Could Screw Over Sex Tokens: According to a few industry professionals, both from the adult industry and the crypto-sphere, two new bills being pushed through Congress could spell trouble for cryptocurrencies that target legal sex work.  The packaged-deal bills, Fight Online Sex Trafficking Act and Stop Enabling Sex Traffickers Act (FOSTA-SESTA for short) could “cause a problem for anyone involved in any kind of sex work,” Spankchain co-founder Janith Griffith believes, as “[producers] can be in trouble for, ‘promoting prostitution,’ [and] it could also potentially cause a problem for token holders.”

Winklevoss Twins Want to Weed Out Crypto Fraud with Self-Regulatory Organization: Cameron and Tyler Winklevoss have done well for themselves for some guys who, arguably, had the concept for Facebook filched out from under them.  The (in)famous duo have become industry movers in the blockchain world with the Gemini Exchange. Now, they’re using their influence to propose a self-regulatory body for US-based exchanges.  The Virtual Commodity Association would, they believe, help improve security, transparency, and management standards across the board for exchanges.

How to Read a Cryptocurrency Whitepaper: Yes, whitepapers can often feel like a minefield of technical jargon and painfully abstract concepts, but if you’re investing in a project, it’s crucial to learn what it’s about–and what better way than straight from the horse’s mouth?

What is Metal (MTL)? Beginner’s Guide: Learn more about the how the Metal team wants to accelerate adoptions with an accessible, all-inclusive wallet solution for all your crypto needs.

This Strip Club in Vegas Lets You Pay For Dances in Crypto: Got a vice for gambling on magic internet money and sex?  Great. Now you can feed your lascivious leanings with your crypto stack at Legends Room in Las Vegas.

What is WAX?: WAX, short for Worldwide Asset eXchange, is a global decentralized marketplace for video game virtual assets.

House Subcommittee Holds First Ever Hearing on Cryptocurrencies, ICOs: The US House of Representatives finally gave ear to the emerging cryptocurrency market this past Wednesday.

Cryptocurrency Solutions Helping the Pot Industry With its Growing Pains: What They Are, What They Could Do: Both would probably draw disapproval from your girlfriend’s father, so why shouldn’t the two go together?

Meet Alexandra Prodromos, the Driving Force Behind Chicago’s Rise as a Leading Blockchain Hub: Sometimes, the blockchain industry is criticized for not including enough women, while other times, the women who are in the industry are among its most influential members.

Binance to Launch its Own Blockchain for Exchange, BNB Token: As if in response to the API phishing attack on some of its users, Binance is upping the ante by developing its own blockchain.

You’ve Heard of ICOs, but What About Venture Capital Investments in Crypto: It’s an old dog’s trick, but it’s holding up pretty well against the pack of ICOs challenging its turf.

What is Golem (GNT)?  Beginner’s Guide: Imagine a global supercomputer driven by blockchain technology. Now that you’ve got the idea, check out our guide to learn more.

What is DDEX? The Decentralized Digital Exchange: DDEX empowers wallet-to-wallet trading of cryptocurrencies. The great benefit of the DDEX exchange is that you can securely trade tokens without having to open an account and share your name, address, and other personal information.

Which City Will Be the Capital of Blockchain Technology?: There are a handful of cities competing to the next Silicon Valley for blockchain, but which will win out?

Bitcoin Full Nodes: What They Are and How to Set One Up: These nodes support the Bitcoin blockchain, and if you can stand the learning curve to set one up, you can play your own part in the decentralized revolution as a node owner.

Blockchain Storms the Freelance World: Six Startups to Watch: As technology advances, freelancing has become a more viable alternative to traditional career paths, and crypto intends to make it even more so.

Estonia’s E-Residency and Blockchain Governance, Explained: The E-Residency program allows anyone around the world to contribute to or start a business in Estonia, a fitting complement to the decentralized future crypto is working towards.

Beanie Babies, Chicken McNuggets, and Gambling: John Oliver Talks Crypto: On his TV segment Last Week Tonight, John Oliver broached the topic of blockchain in his typical sardonic style.  From caustic to downright condescending remarks, he likened investing in the market to gambling, laughed at comparisons of blockchain to chicken nuggets, pulled out the age-old Beanie Babies comparison, and even talked about EOS.  Above all, a single message pervaded his segment: investors beware and tread carefully.

Introducing Binance Chain, the Next Step in Binance’s Crypto Journey: That’s right–Binance is working on launching its own blockchain.  The exchange made the developments public in a blogpost this Tuesday, with no set date for when the team plans to take the chain live. The move seems to be in response to the recent API hack Binance users suffered, and among migrating BNB coin to the new blockchain, it gives the impression that the exchange may be moving to a decentralized model.

Binance was growing too quickly, and too busy to start anything else. So, all we could do is, to just start one more Binance. https://t.co/r5RjPNyrDq

South Korea Lightens Up, Gives ICOs a Green Light: The South Korean government is making moves to reverse its ban on domestic ICOs.  At the end of last year, South Korean officials outlawed ICOs for fear of investor risks and fraud, but according to a quoted government official in local news outlets, “[the] financial authorities have been talking to the country’s tax agency, justice ministry and other relevant government offices about a plan to allow ICOs in Korea when certain conditions are met.”

Thailand’s SEC Set to Release Gameplan for Cryptocurrency Regulations: The Thai government has plans to release formal legislation to oversee the cryptocurrency industry, reports from earlier this week revealed.  The government hopes that the legislation will reduce fraud and money laundering in their homeland, as well as set up an official framework for taxing cryptocurrencies. The regulations are scheduled to be released towards the end of the month.

First Facebook, Now Google: Crypto Ads Soon to Be Barred from Google’s Services: One of the internet’s overlords is stanching the flow of crypto-related ads on its services and platforms.  Google will stop displaying anything that deals with cryptocurrencies this June,“including but not limited to initial coin offerings, cryptocurrency exchanges, cryptocurrency wallets, and cryptocurrency trading advice.”

Israel Tells Crypto No On Tel Aviv Stock Indices: A formal announcement Israel Security Authority indicates that the Israel government will bar any cryptocurrency/blockchain-related firms from Indices on the Tel Aviv Stock Exchange.  Therefore, any financial institution that trades, mines, or invests in cryptocurrencies cannot list an index on the exchange, but the stocks for such companies are still eligible on the exchange. march 16this week in cryptocurrency