This Week in Cryptocurrency: February 1, 2019 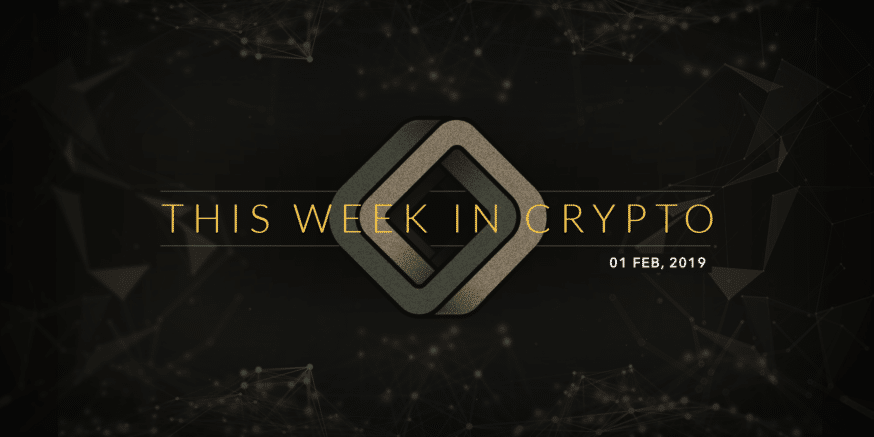 Another disappointing week in cryptocurrency with the entire market losing around five percent in the 7-day timeframe. Altcoins were in a sea of red with only Litecoin (0.22%), Holo (22.33%), and some stablecoins showing any positive movement. Like the rest of the market, the top three cryptocurrencies underperformed as well.

Cboe Re-Enters Bitcoin ETF: After withdrawing their Bitcoin ETF proposal just a week ago, the Chicago Board Options Exchange (Cboe) has submitted it for approval once again. After several decision delays by the SEC, the Cboe withdrew the proposal on January 23rd, fearing the government shutdown would stonewall it.

With the government, specifically the SEC, back to running at full force, leaders of the Cboe believe they can work together to finally get a Bitcoin ETF passed the regulatory hurdles.

Merck Receives U.S Blockchain Patent: In a January 30th press release, Merck announced that the United States Patent and Trademark Office (USPTO) has granted the company with a patent relating to “crypto-objects.” This patent builds upon others that the company has established and combines Artificial Intelligence (AI) with blockchain technology. It’s the organization’s hope that this new patent will help to improve the integrity of physical products, including pharmaceuticals, in global supply chains.

Blockchain Drones | Entering High Flying Automation: We know what you’re thinking, “Blockchain and drones, sooo 2017.” Well, they’ve got a bright future ahead too.

Why the Crypto Industry Needs to Forget Price Predictions: Instead of asking, “When moon,” you should be wondering, “When adoption?”

Zcash Mining More Profitable Than Bitcoin & Ethereum, Faces Inflation Problems: Bitcoin and Ethereum have always been popular mining options, but you may want to look at this privacy coin instead.

NiceHash vs. Minergate: Whose Cloud Mining Is Better?: In the world of cloud mining, there’s a lot of crap. We compare two of the top competitors.

Blockchain Anti-Corruption Projects: Building a Better Government: Can blockchain be an unstoppable force against corruption? We find out.

Initial Car Offering: Were Tesla’s Model 3 Reservations a Quasi-ICO?: The ICO strategy of raising money before building a product is tempting. And, it seems as if even ol’ Musky isn’t immune.

Huobi Exchange Review: How Does the Singapore-Based Exchange Stack Up?: We cover all you need to know about this top ten cryptocurrency exchange.

A Digital Currency Revolution Is Taking Place in Venezuela: Venezuela is in the midst of a political standoff. And the tension is driving the want (or need) for Bitcoin.

Crypto Insurance: Are Your Satoshis Protected?: If you’re not willing to hold your crypto in a personal wallet, you should at least be aware of the insurance policies of the platforms you do.

Swift Announces Trial with R3: On a panel at the Paris Fintech Forum on Wednesday, Swift CEO Gottfried Leibbrandt announced a proof-of-concept partnership with blockchain company R3. R3, a major competitor to Ripple, will soon link its platform to Swift’s Global Payments Innovation (GPI). GPI is a new payments standard framework “that’s able to speed up cross-border payments between banks, with end-to-end tracking of transactions in real-time.”

Interestingly, Ripple CEO Brad Garlinghouse was also on the panel. Although he spoke of his openness to work with Swift, he also argued that “decentralized systems I think over time are likely to win…I think that today that is not what Swift is.”

Participants in the trial had several positive pieces of feedback to say. Tay Khiam Back, CEO of Hupco, a Singapore-based importer stated, “We are delighted with the outcome of the trial. By using the e-BL, we have seen how the entire shipment process can be simplified and made more transparent with considerable cost savings.” While Lisa Teo, Executive Director of PIL, said, “We have received very positive feedback from the industry and authorities, and we are enthused by the possibilities of how our blockchain developments can transform and inject a much-needed boost in efficiency and innovation into the industry.”