This Week in Cryptocurrency – December 8th, 2017

Bitcoin Continues to Boom: If you thought last week was a big week for Bitcoin’s price, I hope you saved some surprise for this one. Bitcoin skyrocketed up to $17,500.00 on CoinMarketCap. Some Bitcoin enthusiasts have their eye on $20k, $30k, and even $50k, while some Bitcoin antagonists are continuing their not-so-veiled doomsday prophecies disguised as concerns for their friends’ financial well being.

Alts Took a Breather: One of most notable alt growths this week was IOTA, nearly 4xing in price. Many of the other alts took it easy this week, slightly pulling back from the explosive growth they saw last week. Ethereum fizzled back down to $430.00, Litecoin fell to $97.00, Dash dropped to around $690.00. Monero, however, jumped to the $280 range. 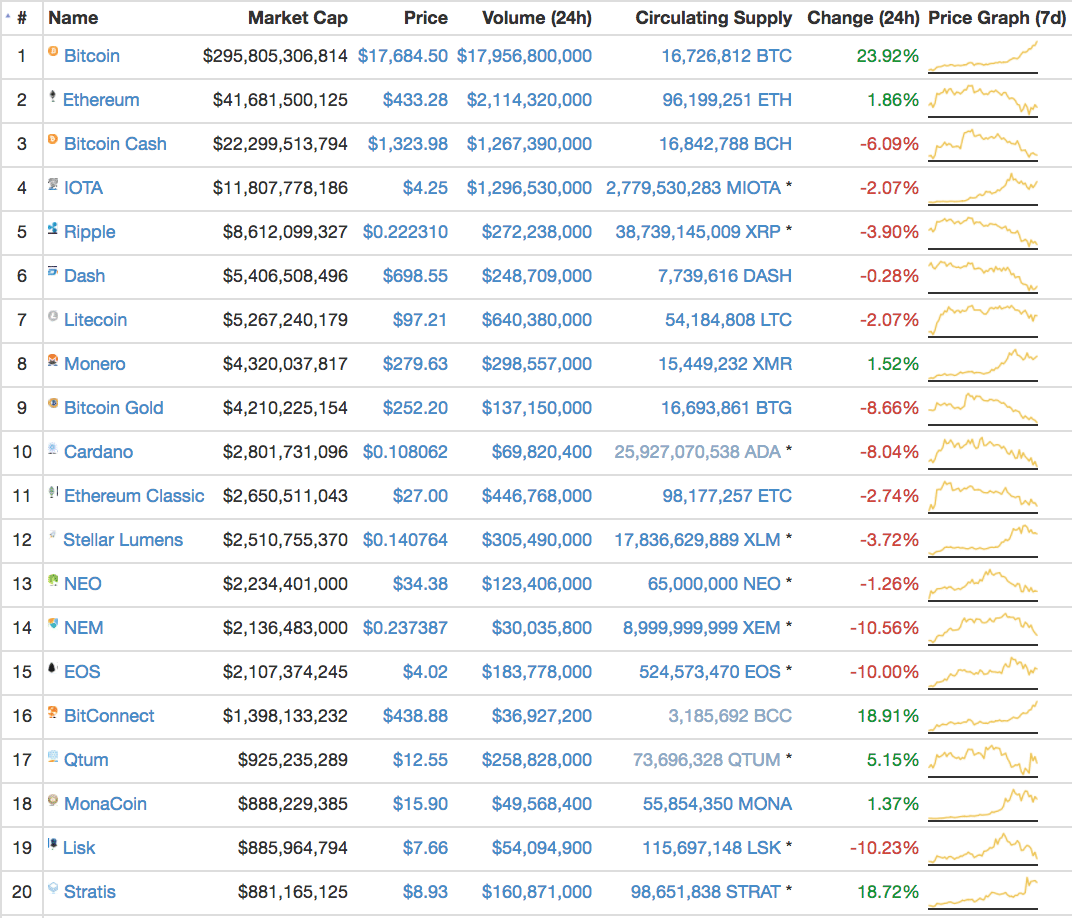 Rise of the CryptoKitties: Like crypto? Love cats? Cryptokitties exploded onto the scene this week. Reminiscent of Neopets, CryptoKitties is essentially a platform for the purchase and exchange of digital kittens powered by the Ethereum blockchain. Users can buy cats, breed them, and sell the offspring to other users. CryptoKitties brought in about $7 million-worth of exchanges, with some users being able to consistently receive a 200% to 400% return on their kittens in a span of a few hours. Is it weird? Yes. Am I going to buy a CryptoKitten at some point? Probably.

However, this is something that re-energized the critical discussion of how Ethereum can move past these issues.

The Big Short: Bitcoin Edition?: The rumor that there is going to be a massive short on Bitcoin has started to gather some steam. With the planned introduction of bitcoin futures contracts at the Chicago Mercantile Exchange, the option to bet against Bitcoin is going to attract a significant amount of interest. Bitcoin’s growth has been to the tunes of millions of percent since it started in 2010, and some people are looking at Bitcoin as one of the “greatest shorting opportunities ever.”

While it is just a rumor, the idea that the estranged world of traditional finance is going to utilize the introduction of Bitcoin futures to make some sizeable returns doesn’t seem too far-fetched. This sounds especially reasonable given the fact that big names such as JPMorgan CEO Jamie Dimon are having their reputations dragged through the dirt every week Bitcoin picks up more and more growth.

Steam Breaks Up with Bitcoin: Valve, the owner of video game distribution platform Steam, stated that it is ending support for Steam purchases made with Bitcoin because of the “high fees and volatility”.

As the price of Bitcoin continues to rapidly sway between highs and lows, and the increase in transaction fees continues to increase, it’s difficult for platforms such as Steam to reasonable utilize Bitcoin as a payment option.

Some Bitcoin transaction fees topped around $20 a transaction, which is much less palatable compared to the original $0.20 fees when Steam first enabled Bitcoin. It didn’t make much sense for people purchasing a $50 video game to spend an additional $20 just for the transaction.

This is one of the first major retailers and distribution outlets to pull their support of Bitcoin as a payment method, which is a sizeable blow to the idea that Bitcoin is a convenient payment method for day to day transactions.

Bridging the Gap: As Bitcoin continues to grow in price, many new projects are coming out with new ways to bridge the gap between traditional banking and cryptocurrency. For example, one of the projects, Revolut, is a $90 million-funded mobile banking startup aiming to help people spend their crypto on daily transactions in a more user-friendly way. Someone using the Revolut debit card would be able to fund their transactions with cryptocurrency if they run out of fiat.

Bank of America Sets Sights on Crypto: Bank of America, the second largest bank in the United States, won a patent to create a unique, automated cryptocurrency exchange system that would convert digital currencies into others.

The patent also describes a three-part system, where the first part is the customer’s account and the other two are accounts owned by the business running the system. Users can store their cryptocurrency  In their customer account, the second account would hold the cryptocurrency as a “float account”, and the third would carry the equivalent amount of the new currency and transfer it to the original customer account.

The patent claims this service would be for enterprise-level customers, “”Enterprises may handle a large number of financial transactions on a daily basis. As technology advances, financial transactions involving cryptocurrency have become more common. For some enterprises, it may be desirable to exchange currencies and cryptocurrencies.” The system could also flag transactions for potentially illegal trades by calculating a risk score based on the amount of the transfer, and any other pertinent information.

This week, we brought you some more awesome resources.

Viva La Petro: Venezuelan President Nicolas Maduro announced that Venezuela will be launching a cryptocurrency backed by oil, gas, gold, and diamond reserves. The “petro” will help Venezuela “advance in issues of monetary sovereignty, to make financial transactions and overcome the financial blockade.” This is referring to the U.S. sanctions that have impacted Venezuela’s ability to move money through international banks.

The irony in Venezuela suddenly announcing they’re starting a cryptocurrency for the above reasons is that many of Venezuela’s citizens are starting to become heavily involved in cryptocurrency mining in order to circumvent the government’s controls on their ability to find USD, make purchases online, as well as the rapid inflation of the native bolívar.

Bulgaria Bags Bitcoin: The Bulgarian government is sitting on roughly 213,519 Bitcoins (about $3.4 billion) from an organized crime crackdown back in May. Authorities commented on the seizure, “The offenders choose the bitcoin way of investing/saving the money because it is rather difficult to be tracked and followed.” The alleged criminals were also accused of creating a virus that hacked Bulgarian Customs computers that allowed them to bypass paying fees when transporting goods into Bulgaria.

A Future in Tokyo: The Tokyo Financial Exchange has started brewing actions around the idea of creating a Bitcoin future offering on their exchange. Similar to the upcoming CME and CBOE futures offerings, the Tokyo Financial Exchange would allow even more people to access Bitcoin futures contracts. This launch, however, is contingent upon the Financial Instruments and Exchange Act recognizing cryptocurrencies as financial products.

Wrestlemania: Bitcoin vs. China + Russia? Another rumor circulating around is that Bitcoin could hit as high as $60,000 before a sharp and steep crash to below $1,000. This sudden plummet will be due to China and Russia “unleashing a multi-pronged assault on the decentralized cryptocurrency ecosystem to “shift the focus away from Bitcoin” because of their concerns about a capital flight. However, it’s worth noting these claims were made by a Danish investment bank called Saxo Bank in its publication called “Outrageous Predictions” that aims to identify “highly unlikely events with underappreciated potential.” So, yeah, take this with a grain of salt. Bitcoin Futures Trading: What You Need to Know