Tron vs. XRP, and Both Controversial Tokens Against the World In addition, analysis of these two projects shows that they reflect different goals and strategies from many traditional crypto projects. Does that mean that it’s TRON and XRP against the rest of the crypto world? Let’s take a look.

TRON and XRP vs. Ethereum and Bitcoin

TRON and XRP respectively provide the antithesis of Ethereum and Bitcoin. While Bitcoin seeks to displace traditional banks and financial organizations with its decentralized and trustless network, Ripple’s XRP seeks to serve those very organizations as its target market.

As Ripple CEO Brad Garlinghouse once said, “Ripple is a private, cash flow positive company and we don’t have any plans to raise additional capital (and no offense, but if we did, we’d only raise capital from institutional investors!).”

On the other hand, TRON hopes to provide a decentralized platform for the development of decentralized applications (DApps). Ethereum created this model, so TRON intends to compete directly against Ethereum.

Vitalik Buterin, the creator of Ethereum, emerged from a software engineering and research background. But Justin Sun, creator of TRON, comes from a background of business and entrepreneurship. Moreover, Sun worked at Ripple for over two years. Consequently, TRON and XRP approach blockchain from a business perspective first, rather than an engineering perspective.

A Problem to Be Solved–And Paid For

Currently, for example, a multinational corporation headquartered in New York required to process funds to Tokyo must jump through multiple hoops. The corporation deposits funds to a service to make the transfer, pay fees for that service, accommodate any relevant laws and regulations, and deal with exchange rates. It also waits patiently while each step of the process takes time to complete. Time zone differences alone create problems.

Moving money across borders currently presents so many challenges that to maintain liquidity in a given country, multinational corporations store large deposits in that country. But storing large sums there may not be the best use of that money.

Cryptocurrency resolves issues relating to exchange rates, the speed of transfer, and fees. And Ripple intends to solve these problems specifically for large financial organizations. Why target this segment in particular? Because they process a lot of high-volume payments and deal with these issues constantly. Cryptocurrency addresses their problems, and as customers, they pay handsomely for ease of use and efficiency.

Four major payment providers MoneyGram, MercuryFX, IDT, and Cuallix have all announced they would run pilot programs of Ripple’s products. Other users of Ripple include Santander, UniCredit, UBS, and Standard Chartered.

Servicing this market requires a team familiar with the Fortune 500 culture and comfortable interacting in that environment. Although successful in his own right, the casual appearance of Vitalik Buterin fails to inspire confidence across the boardrooms and C-suites of the corporate world. A shadowy, mysterious character like Satoshi Nakamoto equally fails. 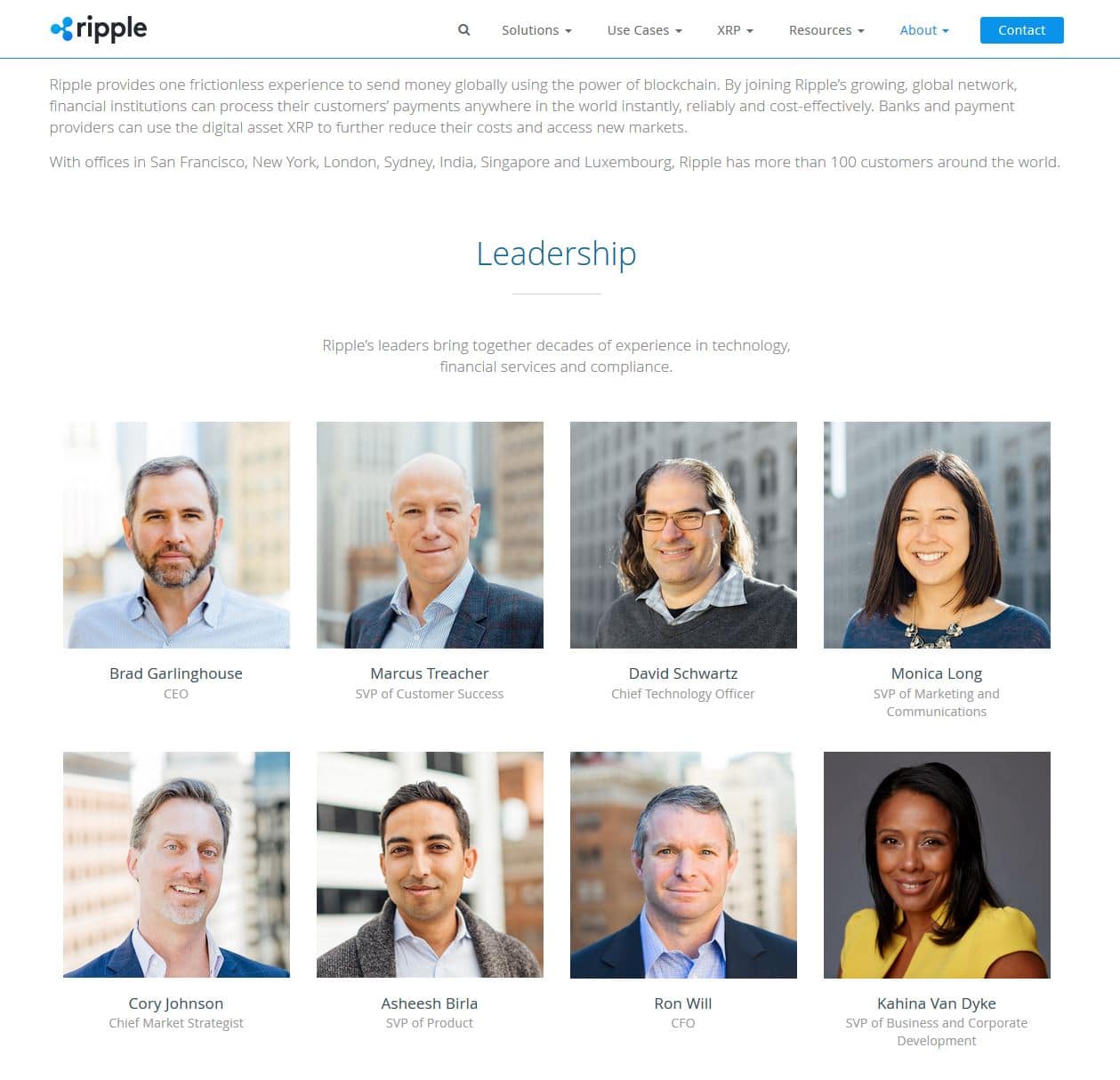 Ripple’s executive team includes Brad Garlinghouse who holds the positions of CEO and member of the Board of Directors. He served as President of Consumer Applications at AOL and held the position of Senior Vice President at Yahoo.

Ron Will serves as Chief Financial Officer and prior to Ripple held the position of CFO at TubeMogul, Inc. Adobe acquired TubeMogul for $540 million. Other executives held significant positions at HSBC, Intuit, Bloomberg, CNBC, MasterCard, and Citibank. The team demonstrates high levels of experience and competence.

The question as to whether Ripple exists as a centralized or decentralized network remains irrelevant to the point of being almost ludicrous. Ripple targets major financial institutions and the financial departments of large corporations as its chosen market segment. Decentralization appeals to cypherpunks, anti-establishment advocates, libertarians, revolutionaries, and technologists.

TRON and XRP take different perspectives. While Ripple focuses on providing solutions for corporate needs, TRON almost appears to be one man’s vanity project. But Justin Sun, the founder of TRON, demonstrated success in past ventures, so he shows sufficient business skills not to be dismissed out of hand.

What Problem Does TRON Plan to Solve?

TRON began as a decentralized entertainment content sharing platform. But now TRON claims complete decentralization of the web as its current goal. And to quote the corporate website, “As a decentralized platform in Web 4.0, TRON’s powerful capability make it be adaptable to a wide range of complex scenes and also support applications with vast amounts of users.”

(What they mean by “Web 4.0” remains unclear. Web 1.0 defined the first static web pages on the internet. Web 2.0 provided rich user interfaces we see today. Decentralized blockchain often gets referred to as Web 3.0.)

While Ripple XRP boasts a large and experienced executive team who all show powerful accomplishments, a look at the team page on the corporate website for TRON shows an egocentrically large photo of Justin Sun. The site lists no other corporate officers. But it provides a group picture of a large number of anonymous, unsmiling youths who apparently serve as programmers.

How much music can you really listen to from a one-man band?

Without innovations in technology or a visible team leading the project, the future of the TRON project appears to reside in the organization’s ability to negotiate deals and partner with other organizations.

In March of 2018, TRON partnered with the BitGuild gaming platform. According to the agreement, BitGuild provides a unique set of limited-edition in-game assets for the TRON community. Later on, in May of 2018, TRON announced a strategic partnership with vSport. vSport uses blockchain technology to serve the soccer community.

Finally, in June of 2018, TRON acquired BitTorrent. BitTorrent created a communications protocol for peer-to-peer file sharing. If you lack the skills to build technology, then, by all means, buy a company that compensates for your deficiencies.

Ethereum introduced the concept of a decentralized platform for application development. The Ethereum Foundation continues to innovate, research, and develop new blockchain technology. TRON gives the impression of being a basket full of buzzwords with no discernable team to implement a vision. But perhaps that will change. TRON’s one notable strength appears to be its access to capital to purchase what it can’t build.